Breaking Down T’Challa Star-Lord with ‘What If…?’ Head Writer A.C. Bradley – Exclusive Interview 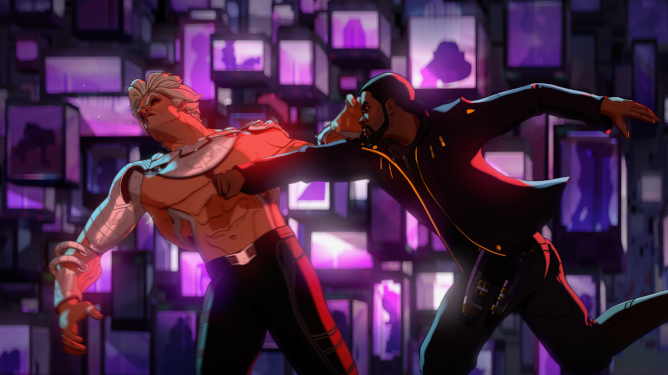 Spoilers ahead for Episode 2 of What If..?

The second episode of What If…? has arrived, and it’s certainly nothing to sneeze at, as this is the episode featuring one of Chadwick Boseman’s final performances as in his iconic role as Prince T’Challa, the Black Panther.

The episode deals with the scenario What If T’Challa Became a Star-Lord where, after the Ravagers are sent by Ego to find Peter Quill, Kraglin and Taserface accidentally pick up T’Challa from Wakanda rather than heading to Missouri where Peter Quill resides. This change ends up creating a domino effect that not only impacts T’Challa and Yondu in unique ways, but impacts the Marvel Universe in a whole new way.

The start of the The T’Challa Star-Lord episode has been something fans have been very excited for ever since the first images dropped. Now it’s the start of Chadwick Boseman’s final performance as T’Challa. What was it like handling that episode?

A.C. Bradley: That episode we wrote back in, let’s say January, February of 2019. So that was a long time ago. We wrote it over two and a half years ago. And we came to the episode from a place of “what’s the different story we can tell about T’Challa?” while staying true to his character. Chadwick Boseman was very lovely. He cared very much about how T’Challa is portrayed. He asked to read the scripts before he came in, which many of the actors did, so they could prepare. But I got the feeling that Chadwick would want to make sure we were doing right by T’Challa and Black Panther. That What If…? didn’t mean that we threw out the character and the hard work that he, Ryan Coogler, Nate Moore, the entire Black Panther team had done. And we didn’t. We had shared the script already with both Ryan Coogler and the producer, Nate Moore, to make sure we were accurate. And we also shared it with James Gunn, so he would see what we were doing with his Ravagers. Chadwick came in, and he’s such a talent, he had fun. He gave it his all, he would do a line two or three times and we’d be super happy and he’d be like, “No, no, let me do it again. Let me give you more options.” And he understood how important it is that T’Challa stand shoulder to shoulder with the likes of Captain America and Thor and Iron Man, that future generations and the generation of today need to see a black man as their hero. And we just wanted to make sure we did right by the character. And obviously after Chadwick’s passing the episode was already in animation, but when it came to every step along the way, we wanted to make sure we did right by him.

The start of the episode features a pretty big divergence from the first Guardians of the Galaxy film. It’s a very different reaction when T’Challa says that he’s Star-Lord compared to when Peter Quill says he is Star-Lord. T’Challa actually has a good reputation that clearly Peter wishes he had. T’Challa made the galaxy a better place compared to Quill. So what was it like coming up with that difference? T’Challa is a very honourable character, and now he’s a different character altogether. So how does that compare to Quill?

A.C. Bradley: Peter Quill and T’Challa are very different characters, in the sense that Peter Quill has a great character arc brought to life by Chris Pratt and James Gunn, where he starts off as this sort of selfish young guy, trying to escape his past as with the Ravagers, and then becoming a Guardian of the Galaxy and finding this new family with the Guardians. And it’s a great story and I love Guardians 1 and Guardians 2. T’Challa doesn’t arc so much; he changes the world around him. He is a man that is always going to be looking at the bigger picture and where you can help and how we can do better. And so the idea was that nine year old T’Challa still has all the lessons from T’Chaka and his mom, Queen Ramonda, and of Wakanda that he then takes with him when he joins the Ravagers and with the sheer power of his will and his personality, he changes the Ravagers and then the other characters he has come in contact with. So when we catch up to him as an adult, he has this reputation that almost mirrors the one he would have on Earth as Black Panther. And before someone on Twitter tells me that Star-Lord was the nickname that Peter Quill’s mom gave to him, the reason he’s called Star Lord is that we were guessing that Yondu knew that Star-Lord was also the nickname of Ego. That [Meredith Quill] called Peter Star-Lord because she knew Ego was not human. And so that’s how the word was in the ether that Yondu was aware of it and he started calling Peter almost as a fun joke. And then it kind of just kept going, and T’Challa doesn’t like the title. Because he’s just a regular guy trying to do good. He’s not royalty, as far as he knows.

In regards to changing the world around him, the biggest surprise that I had from the episode was seeing Thanos on the Ravagers, and the joke surrounding that. I’d like to know where that idea came from. Additionally, there’s his new relationship with Nebula, which is kind of touched upon, but more so hinted at, where did that come from?

A.C. Bradley: It came from a few places. We were writing it with Endgame coming out in a matter of weeks, or months. We’d already seen it. And so the Thanos question was looming large. And to be honest, we don’t really play around with Thanos in the rest of the series, because we did it so well here answering the Thanos question, which is, does this universe still have the snap? So we decided that like, wouldn’t it be funny if T’Challa just had a conversation with the man and convinced him that like, you know, genocide is not the answer. And that was almost like a joke that we were tossing around. But then it gave us so many gifts, which is, without Thanos, there’s a power vacuum. And, you know, nature abhors a vacuum, so the Collector gains prominence. And then what can we do with Nebula? Gamora and T’Challa don’t seem like a match, and Gamora is so great with Peter Quill, we don’t want to split up the fan favorites. But there’s something about Nebula: if she had a somewhat normal, probably like late childhood teen years, what would she be like? And then her having this kind of fun banter with T’Challa, which is also by the way, a staple of heist movies. And in a way, she’s our Julia Roberts from Ocean’s 11. She’s the girl and Karen Gillan came in and she was an absolute delight. She brought so much more to that character and the role. “Cha Cha” was actually her idea. I’m pretty sure it was her doing an ad lib, which then we asked her to throw in a few more scenes, because it was such a fun little moment.

It was a nice touch. And I mean clearly this is so much about crafting different relationships, especially like T’Challa and Nebula. But what about T’Challa and Yondu? What was it like creating the relationship between those two, because it’s obviously similar to Quill and Yondu, there’s something different about it.

A.C. Bradley: We were playing around with this notion of found fathers and your birth father, and the notion of found family and the family you’re born to. And at the end of the day, it doesn’t matter that you don’t have to pick between them, you can have both your families, because that’s what family is about. They love you for who you are, wherever you are. And the idea is, the difference between Yondu and T’Challa is that T’Challa isn’t a character that has to mature so much as he changes everyone around him. And the idea that he helped change Yondu before the episode starts, he helped him kind of turn the Ravager lifestyle into less of, you know, petty crime and more into petty crime for the sake of doing better than the galaxy. And how that kind of fulfilling mission kind of changed the Ravagers altogether.

So we can almost say that he kind of turned the Ravagers into the pre notion of this universe’s Guardians, essentially.

A.C. Bradley: He turned them into Robin Hoods. We like the idea that T’Challa would never steal for himself, but he would steal to help whole planets of people and that there’s something fun about that. And we were lucky Sean Gunn came back  to voice Kraglin, he was a blast. And I think he gave us the funniest ad lib improv line. But sadly, he got cut for time. Yeah, he was great.

What If..? premieres new episodes every Wednesday on Disney+

Read Next: What If…? Head Writer Explains How Marvel Zombies Came To Be