The DCEU Ranked Worst to Best 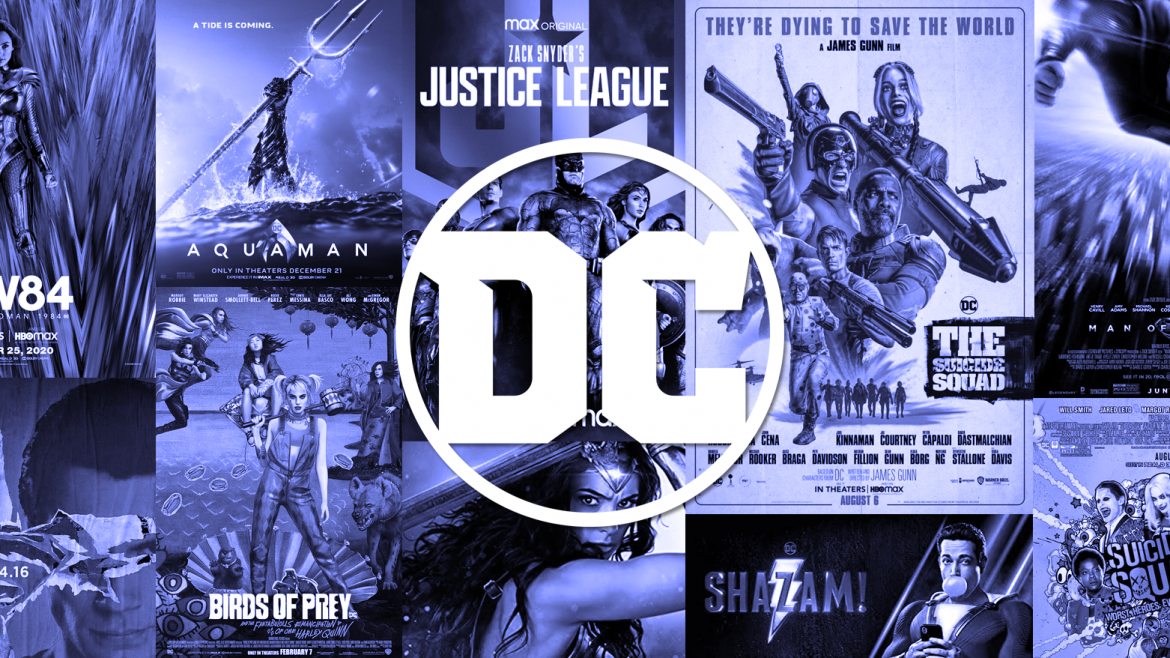 The DC Extended Universe (DCEU) has been on one of the most tumultuous journeys of any major studio franchise. There have been numerous highs and lows, retcons and continuity issues, grand and epic spectacle, and embarrassingly lackluster moments throughout its ten films and counting (eleven if you include Joss Whedon’s Justice League, which has been omitted from this particular list for obvious reasons). While originally planned as an interconnected cinematic universe along the likes of Marvel Studios, with an overall vision from director Zack Snyder, mixed results have shifted DC’s approach to now focus on more individual narratives rather than a larger, overarching story.

That initial idea may have not panned out to the ultimate desires of the studio and fans, however, DC does seem to have finally gotten into a sort of hot streak as of late. Their latest batch of films have felt more focused, effective, and most of all, enjoyable. Whatever the future may hold for the universe and its many beloved characters, especially under the new regime of the Warner Bros. Discovery merger, it seems obvious that its rabid fanbase isn’t going anywhere anytime soon – especially if the saga surrounding the Snyder cut is any indication. So here are all of the DCEU films ranked from the worst to the best, just please don’t start an online campaign to make us change it.

(Note: Elseworld films like The Batman and Joker are not considered main DCEU)

There’s really not much you can add onto the established dogpile of criticism and mockery that has befallen Suicide Squad in the years since it unironically became one of DC’s biggest box office successes. Yes, there are the obvious signs of behind-the-scenes issues with the film’s awkward Frankenstein-like editing (large sections seen significantly trimmed down or removed entirely), far too frequent pandering needle drops that often don’t seem to serve any thematic purpose (what exactly Bohemian Rhapsody has to do with anything in the movie, I don’t know), and other glaring issues. It’s a well-known fact that director David Ayer had no control over the final cut, which was instead given to a literal trailer production company. Still, the biggest issue with Suicide Squad is first and foremost its script. It’s unclear if a more complete or rearranged version, otherwise known as the Ayer Cut, would have improved it much.

Zack Snyder’s follow up to Man of Steel is still his most ambitious work yet, even more so than his Justice League. The film serves as a monolithic and subversive portrayal of iconic superheroes Superman and Batman as well as a critically dour allegory to a post-9/11 United States. There are strong ideas prevalent throughout Batman v Superman and (love it or hate it) Snyder’s distinct, weighty style feels appropriately symbolic.

But the writing once again undercuts most of the good that the movie has to offer, resulting in an overstuffed and incoherent story with muddled motivations for some of its major characters. After the film’s genuinely brilliant opening scene of Bruce Wayne’s perspective of the devastation caused by Superman’s battle in Metropolis, things never manage to become quite as compelling again.

Wonder Woman 1984 should’ve been the triumphant return of Patty Jenkins and Gal Gadot’s landmark depiction of the world’s most famous heroine, but with the COVID-19 pandemic completely derailing its intended release and a harsh response from critics and fans alike, the film feels like a considerable misfire. There are still things to enjoy about Wonder Woman’s second solo outing – Pedro Pascal is having a blast and gives the story some much-needed energy, it’s a bright and often colorful adventure compared to other superhero flicks (including its own predecessor), and its ideas about desires/wishes are interesting and offer tough lessons.

Though, much like the first Wonder Woman, which offered an initially enriching take on war and achieving peace, things never quite come together as strongly as they could by the end. There are solid elements that get lost in the shuffle of the film’s various ideas that only get further buried under too many lackluster and even cheesy moments. The vitality of Jenkins’ original smash hit just isn’t here.

It’s a miracle that it ever saw the light of day, but in a showing of the power (the good and the bad) of fans and online campaigns, original DCEU leader Zack Snyder was given the chance to complete what is now pretty much his magnum opus. The Snyder cut is all of the very best and very worst of this distinct filmmaker: enormous in scale, visually bold (you’re out of luck if you don’t like excessive slo-mo), and overindulgent to a fault.

For fans of Snyder’s initial vision of where he wanted to take the DCEU and its numerous heroes and villains, the film is a gift that keeps on giving. For everyone else, Zack Snyder’s Justice League can sometimes just come across as an overlong, lumbering behemoth of a comic-book movie – one that may fix some of the glaring issues present in Joss Whedon’s 2017 version, yet others only get further highlighted.

Man of Steel suffers from a series of creative decisions that squander the genuine greatness and potential that it has. Scenes of a young Clark Kent’s humble beginnings on Earth are moving and feel like the start of an appropriately epic origin for the world’s most famous superhero, but the nonlinear way it’s shown does the narrative a severe disservice. And while the action may pack a real punch, the climactic showdown between Superman and General Zod ultimately dissolves into just that: a lot of punching that goes nowhere in particular.

The kick-off of the DCEU feels about halfway there to being a great film; its story and characters simply lack the necessary depth to push it where it needs to be. There are glimpses of brilliance here combined with a great cast, although when compared to the film’s astounding trailer, Man of Steel is still a considerable disappointment.

Who would’ve thought that out of all of DC’s main roster of heroes, it would be Aquaman – the butt of endless jokes for decades – who would become the biggest success for the studio? James Wan appears to have been given near-total creative freedom with the character’s first solo outing and the results are completely unhinged, maybe in all the right ways. 2018’s Aquaman, starring Jason Momoa as a new and cool take on the character, is massive. The film’s third act becomes a full-scale undersea war fought between countless soldiers, animals, monsters, and gods; the most direct evidence that Wan was unbridled in his approach to reinventing Aquaman and his world for modern audiences craving grand and awesome spectacle.

While certainly no masterpiece in terms of plotting or dialogue, the film felt like a breath of fresh air compared to the rest of its brethren, and its box office domination showed that people were beyond ready for the DCEU to lighten up and have a bit of kooky fun.

Wonder Woman’s long overdue cinematic solo debut lived up to nearly all expectations, giving Diana of Themyscira the proper chance to show what makes her so endearing. Diana’s bravery as she leaves her home to join the front of WWI and the lessons she learns about the real world along the way are a true hero’s journey, and with Steve Trevor joining her, the film offers a solid romance as well.

Chris Pine’s comedic chops give the narrative some great levity to go with the genuinely harrowing depictions of war it has, and Diana’s story of learning that you can’t end a war or solve a conflict by simply defeating one singular bad guy is a perceptive idea for the overcrowded superhero field. Of course, that idea appears to nearly be thrown away entirely once Wonder Woman reaches its finale, where Diana… quite literally has to beat up a big CG bad guy to end the war. So much for that!

Give Cathy Yan and Christina Hodson another film with these characters or so help me. Birds of Prey, the first in the DCEU to truly give Margot Robbie’s Harley Quinn her due (Robbie also produced), is a pure delight. It’s zany fast fun, and with an R-rating that it happily leans into, it’s wildly crass and violent in a bubblegum pop kind of way. While not every character manages to feel as fully fleshed out as they could’ve been, the film is still a colorful, action-packed, and consistently lively good time that beat Marvel to the punch when it comes to assembling a women-centric superhero team-up – by years. Please bring Harley’s hyena back.

David F. Sandberg’s take on the quasi-ridiculous premise of Shazam – where a young boy turns into an adult superhero by yelling out the titular name – was a wonderful surprise to nearly everyone. After years of the doom and gloom that came to be associated with the DCEU, Shazam!, along with parts of Aquaman before it, helped usher in the new age for the studio where the movies could be lighter in tone and much more playful.

Sandberg’s film is both funny and sharp, making it accessible to everyone, especially families (that still doesn’t stop the filmmaker from dipping back into his horror roots for some select scenes though). With a smart sense of humor and a self-awareness of the genre it’s playing in, Shazam! feels like DC’s most well-rounded film to date. Anticipation for its sequel, Fury of the Gods, can only keep going higher.

In what was perhaps their most blatant and smartest move, DC quickly snatched up acclaimed Guardians of the Galaxy director/writer James Gunn the second he was fired from Marvel Studios back in 2018. Gunn was hired to helm the sequel to box office smash yet critically maligned Suicide Squad, and the filmmaker goes for a soft reboot that’s hilariously outrageous. Some of the humor feels like riffs on the superhero genre itself, and the rest embraces the obvious goofy, Troma-influenced violence that has inspired Gunn’s career. James Gunn’s The Suicide Squad is basically a splatterfest with heart.

A large amount of the credit has to go to the immensely talented cast, who deftly weave their way between slapstick humor, intense action, and tragic drama. This kind of direction for DC – more standalone, adult-oriented stories – is a welcome change after a slew of disappointing films and a sorely mishandled cinematic universe. The proof is here that these characters, even the relatively unknown ones, are capable of carrying their own movies and becoming fan favorites when put in the hands of storytellers that have a genuine love for them. It’s arguably the strongest of all the recent DCEU films so far, and a hopeful sign that the studio has a brighter future ahead.

Read Next: What More Comic-Book Movies Can Learn From James Gunn & The Suicide Squad

Not hating but the fact that you have birds of prey in top 3 automatically makes this list invalid.