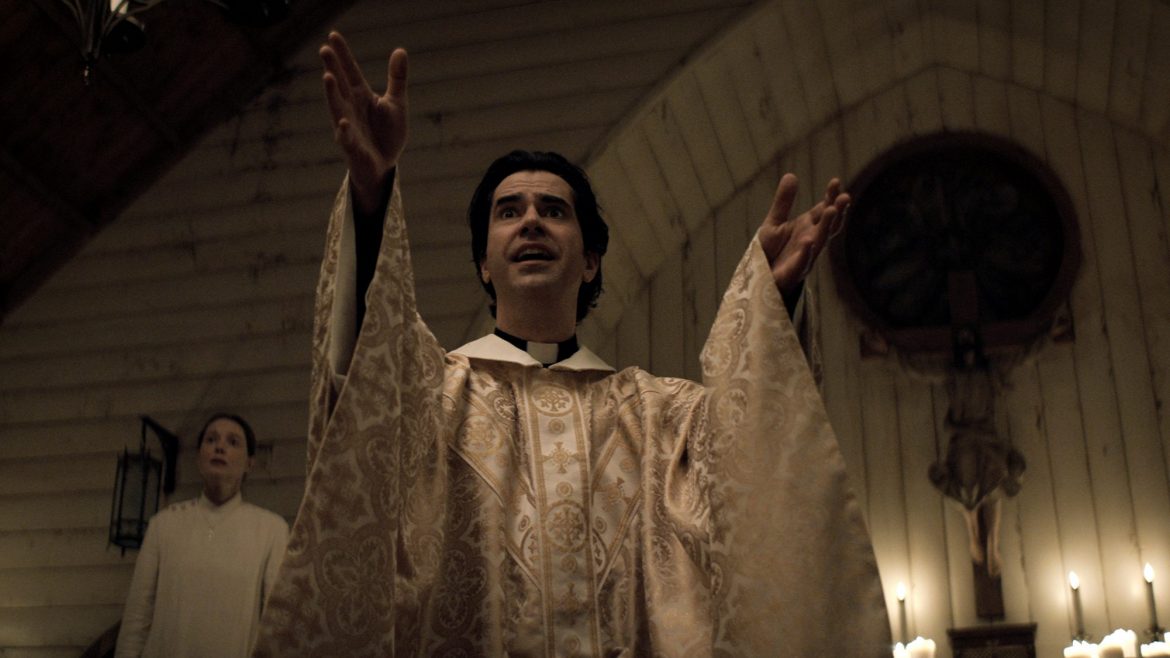 Mike Flanagan is indisputably one of the modern masters of horror. Anyone who’s seen the chilling, heartbreaking, and stirring duo of The Haunting of Hill House and The Haunting of Bly Manor already knows how Flanagan’s genuinely terrifying scares mix beautifully with his characters’ riveting drama.

There’s something distinctive in the filmmaker’s style and approach that’s now recognizable – when Midnight Mass begins, opening on Riley Flynn (Zach Gilford, in an astoundingly understated performance) at the scene of a ghastly incident, it instantly looks and feels like Flanagan. There’s something almost gothic and poetic in the way he and frequent cinematographer Michael Fimognari frame their shots and move the camera; something in the writing and the performances that gives everything a melancholic weight. Flanagan’s work always feels, well, haunting.

This is the third limited series that the Massachusetts-born director and writer has now done for Netflix. At seven episodes, Midnight Mass is also the shortest, yet it certainly feels the biggest both in physical scale (taking place on an entire island) and within the themes and questions that permeate every single scene of the show. Flanagan, who openly admits that this is his most personal story so far (it’s one of the rare projects from him that isn’t an adaptation of a previous work), has a hell of a lot on his mind: Humanity’s place in the cosmos, both the healing power of and the catastrophic bastardization of religion and personal faith, the decay of small town America (economically, physically, and morally), the grip of inescapable nihilism, profound moments of clarity – you name it, it’s there.

Midnight Mass is one of those deep seven-hour conversations you have with someone close to you in the middle of the night after a party or something of that nature. It’s real talk. Flanagan is thinking big with all of life’s eternal questions pouring out of him onto the page, and subsequently onto the screen. What happens when we die? What makes a person good? Can people truly have a second chance? Does a god of any kind exist? What is the meaning of all this anyway? Once or twice, the long-windedness can sound a bit like someone just had their first experience with LSD, but for the most part, Flanagan’s prose has never felt more moving, poignant, and important.

In that respect, Midnight Mass sets things up wonderfully as a drama at first. The story takes place on Crockett Island, a once lively community that has now hit that slow burn of a death that comes to all towns like it. An oil spill, strict fishing restrictions, and we can assume a couple of economic recessions (and stagnant wages and lack of jobs and so on and so forth) have left Crockett Island a husk of what it once was, and it’s in this condition that Riley Flynn returns home to it after many years.

Of course, for Riley, the ‘Crock Pot’ was no paradise. He spent his entire teenage life rebelling against it before eventually escaping, and now, as a weary and understandably jaded adult, is back living with his parents (Kristin Lehman & Henry Thomas) and a teenage brother he hardly knows (Igby Rigney). And while this series isn’t about ghosts like a lot of his work, Flanagan still can’t help himself to his favorite: a ghost of guilt. Riley is haunted every night by an event from his past, in a way that shows jump scares can still be effective when properly deployed.

Riley, directionless and uninterested in the only thing the island has left (church), is relieved when he realizes that a childhood friend of his, Erin Greene (Kate Siegel), has also returned after a similarly rebellious departure. Erin is happily pregnant and has found comfort in St. Patrick’s, the town’s church led by the now ancient Monsignor Pruitt. One day, a younger and fresh-faced priest named Father Paul (Hamish Linklater) arrives on the island to inform the small clergy that Pruitt has fallen ill while on a trip. He is doing well and recovering on the mainland, he informs them, though in the meantime Paul has been sent to fill in.

Mass under the leadership of Father Paul is almost immediately a much livelier and inspiring affair than the residents have grown accustomed to, and the young priest brings back some genuine spirit and happiness to a place that seems like it gave up a long time ago. The isolated community soon begins to witness astounding events, Some are miraculous, like a young girl (Annarah Cymone) who, after being paralyzed from the waist down by a shooting, is suddenly able to walk again. Some are smaller miracles, like eyesight improving or aching backs seemingly mending, still, one thing seems certain: There’s a restoration of sorts happening on Crockett Island, and it all leads back to St. Patrick’s and Father Paul.

But some things turn downright horrifying, like a set of piercing eyes continuously being spotted around the island, or a massacre of local wildlife, or the way more and more people start to go missing. Midnight Mass takes its time and gives itself the proper and investing kind of buildup it needs before revealing what’s really going on – do yourself a favor and don’t spoil this one for yourself. Flanagan is still very much playing in the realm of pure supernatural horror, it’s just one of a different flavor. And once it goes, it goes. All bets are off by the end of the fourth episode, and once you hit the insane and transcendent carnage of the final pair of episodes, your jaw will be on the floor.

The entire cast – many of who have starred in Flanagan’s works before – is tremendous, though it’s Linklater’s Father Paul and the ally he finds in local church lady (you know the one) Bev Keane (Samantha Sloyan) who steal the show. Linklater takes a familiar role and delivers something surprisingly different, vulnerable, and massive all at once in a performance that’s undoubtedly the best of his career. Sloyan does the same thing; the judginess, self-righteousness, and religious fanaticism of Bev isn’t something we haven’t seen before, but Sloyan plays her as someone who’s been awaiting this kind of moment, and this kind of power, her entire life.

Bev is one of the best horror antagonists in recent memory, the kind of character who’s both infuriating and terrifying at once, and symbolizes the dark endgame of all religious crusades. Bev is able to justify every single thing she does and everything she witnesses with a passage from the Bible, and whereas Father Paul has persuasion, she has intimidation. So once the miraculous happenings of Crockett Island go from marvelous to gruesome, they have little trouble convincing almost everyone to just kinda roll with it. God works in mysterious ways after all.

Midnight Mass begins with questioning why a god would allow so much suffering in the world, to be so cruel as to allow it all to happen, constantly, and seemingly forever. The series has a lot of suffering on its mind, and what purpose it serves if any at all. It ends with a cathartic view of what our place in the universe might be, and what can give our lives meaning. The journey there is a gripping, blood-soaked ride that makes for a Halloween watch that will be extremely difficult to top.

Mike Flanagan takes obvious inspiration (who doesn’t at this point?) from Stephen King, and has proven to be one of the rare filmmakers who seems to really understand his work and is able to translate that understanding to the screen. Both Gerald’s Game and Doctor Sleep are fantastic, and Midnight Mass often resembles one or two of King’s better books (to say which would be a spoiler). Ensemble cast, prejudiced small town, religious shenanigans, supernatural terrors? Check. However, Flanagan has made something undeniably his own, and possibly his best yet. It’s simply not afraid of really going for all that it’s attempting to do, and even when the occasional point doesn’t quite connect, two more immediately do. Midnight Mass, for all of its pulpy grandstanding and indulgent bloodshed, is exactly what it should be: Restoring. The horror genre is the best genre, folks. And it’s alive and well.