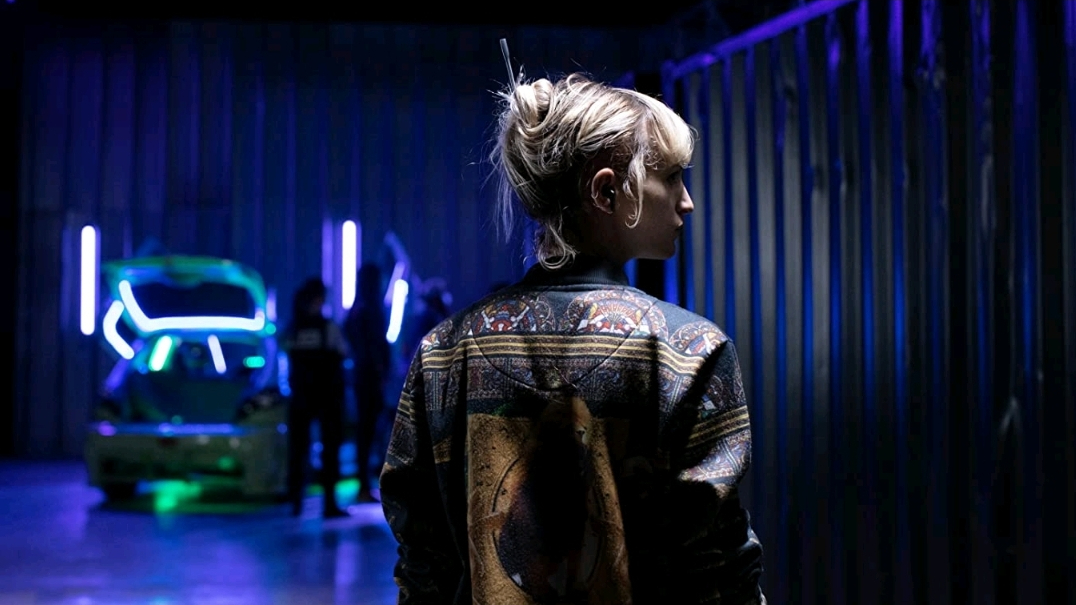 It’s a life or death situation and we watch on, leaning forward in tense anticipation. Every moment counts… and the characters on-screen start singing ‘Macarena.’ It’s this persistent idiosyncrasy embodied in moments of genuine heart like these that bring life to Titane, a film about a car-loving sex worker with a metal plate in her head who goes into hiding after a brutal murder spree. A wildly electric and dauntingly imaginative story told with incredible craftsmanship across the board, Titane is a filmmaking feat of epic proportions.

To summarize it simply, this movie is insane and there’s no denying it. To spare you a diminished first impression, we’ll stay light on the details; there’s almost too much going on here to succinctly recount – and (for better or worse) much of it works off sheer surprise. As a whole, it can feel a bit eclectic, but its many plot threads and ideas come together to paint a compellingly complex portrait of a woman’s journey towards acceptance and love. From start to finish, it embraces its almost laughably outlandish premise and proudly runs wild – something that all art should do.

It’s a shame, then, that Titane will perhaps be mitigated to nothing more than “the car sex movie” in the eyes of many. Drawing some abstract mental association between this piece of confrontational, healing art and getting busy in the back seat of a dirtied pickup feels offensive.

As a child, Alexia suffered a serious car accident at the hands of her father, which required the surgical implantation of a metal plate into her skull. Situated just above her ear, she openly wears the gruesome scar throughout the film, its swirling spiral of painful-looking incisions a lasting visual reminder of all the agony she has endured. Beneath the surface, however, Alexia now wears a more serious scar: an intense discomfort for intimacy and companionship. Her doctor warns that she may suffer some neurological side effects from her injuries, and it soon becomes clear the true ramifications of the accident.

At first, writer-director Julia Ducournou almost invites the spirit of Thelma & Louise, though we soon realize Alexia’s unhinged violence extends beyond those who might deserve it. The film kicks into full gear with a ruthless bloodbath – the kind that you either laugh at or get nauseous from. Alexia’s weapon of choice, a long, black pointed hair stick, finds its way into the necks of any who cross a line of emotional distance or even come close; in some ways, it feels sickly triumphant, and in others, justifiably worrisome.

Leaning hard into bloody gore to tell such a personal tale would be a risky move for nearly any other film, but the veteran director of cannibalistic coming-of-age horror drama Raw uses the carnage to elevate the story’s allegorical weight, emboldening a stone-cold performance from actress Agathe Rousselle, who manages to evoke every emotion possible while staying entirely silent. Visceral images of skewered and mangled corpses are compounded by equally off-putting views of vehicular sexual exploits – a kind of sensationalized consolation for audiences that it is okay to not know how to feel. Despite this, that self-awareness of insanity does not pervade the film, poisoning it with restraint or irony. It’s a graceful balancing act of thrilling horror, jarring intimacy, and even outright touching closeness; a blend of genre and tone that will compel even the most skeptical viewers.

Compared to the rest of the film’s surplus of body horror and gorish exploitation, Alexia’s intimate excursions in the back seat are relatively conservative. Aided by an adept camera that knows its way around a vehicle’s sultry side, Ducournau draws a connection between her protagonist and cars that highlights her emotional isolation. This imaginative presentation of internal turmoil makes for a film that moves at a relentless pace, constantly forcing Alexia into new, interesting situations and circumstances – the most notable of which manifests itself like an intrusive, swelling tumor. It’s an interesting choice by the filmmaker, one that undoubtedly grabs attention and almost balances out the would-be depressing sadism of the film’s body count.

With a twisting and turning plot powered by wild narrative swings, Titane could understandably be described as part comedy; in classical tragic fashion, things just get worse and worse for Alexia. Where the beginning of the film would lead you to believe that Titane was headed for outright action-thriller, what comes after resolves itself to introspective suffering – a much more subdued and subtle (if one can call it that) second half to an already off-the-walls story. Rather than call upon her more violent tendencies, Alexia must face being cooped up in a prison-like abode with a more sensitive eye. It’s a barrier that is as mental as it is physical, bringing some level of tangibility to the arms-length emotional distance between Alexia and her associates. Not to be mistaken as accidental, the film dawdles between manipulative and empathetic, confronting its main lead with confounding relationships with unlikely characters.

But keeping secrets inevitably takes a toll, and the film delivers an endless supply of gut-wrenching bodily mutilation – complete with mysterious oozing fluids. The externalization of Alexia’s need for redemptive reflection is like the ripping of flesh; a painful and cringe-inducing (but not in a bad way) ticking time bomb that you just want to see squared away and tidied up. Yet, Titane’s spiritual journey is a bit too complex for a bow-wrapped finale.

When confronted by the reality of her situation (and an increasingly uncomfortable amount of uncanny body distortion), Alexia is forced to reevaluate what her relationships to others mean – and realize that she is no longer the emotionless killer we met at the film’s start. Dependence and acceptance are at the center of Titane, and the film goes out of its way to tell you so. Watching Alexia deal with her wrongdoings and explore her own feelings brings a wave of sensations, from relief to anxiety, yet it persists as a touching note that coexists with the film’s many idiosyncrasies, playing into the setup of a less conventional finale.

Addressing its wildest genre fantasies and most heartfelt thematic ideas, the film’s final moments ring with vibrant catharsis, a repentant rebirth that brilliantly delivers on all levels. Frustrating in all the right ways, Julia Ducournau manages to explore the nature and responsibilities of love through a deeply compelling, moving narrative thread that weaves together burly middle-aged men, gender fluidity, and broken marriages. It’s a bigger message than simply overcoming daddy issues – it’s a story about isolation and finding love told through a lens of cars, sex, and cross-dressing. Clearly derived from a place of personal passion and healing, Titane is a painfully real story, despite its inherently ludicrous logline.

Titane is now in theaters!