Every New Announcement from DC FanDome 2021 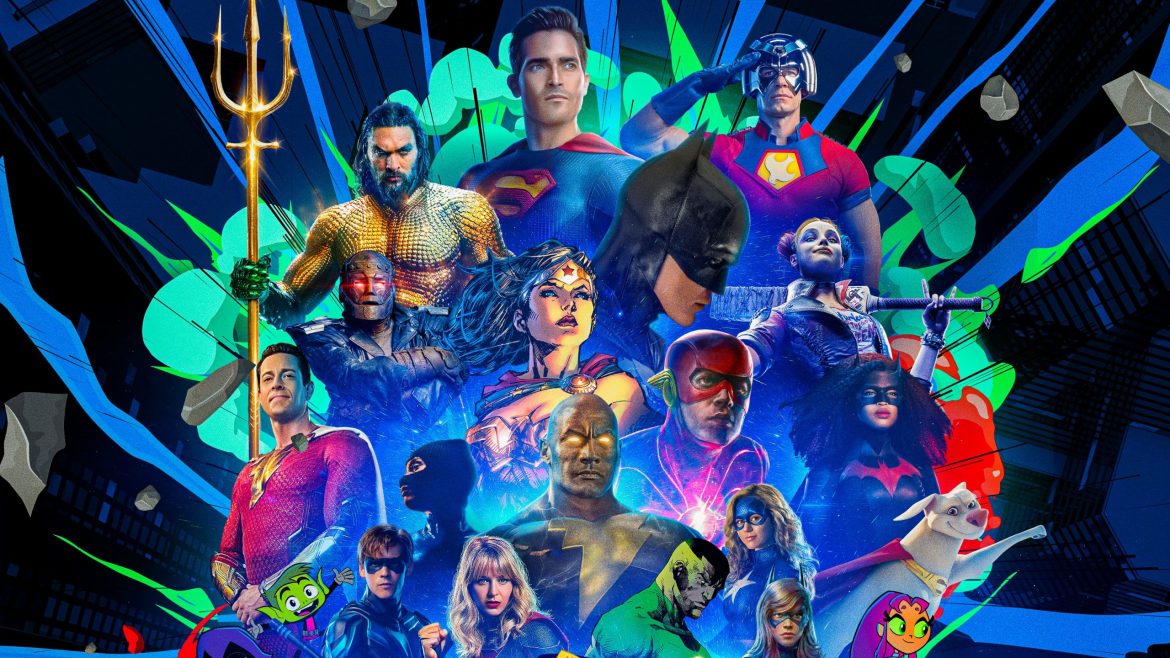 This list will be updated LIVE throughout DC FanDome 2021

DC FanDome 2021 is upping the ante from its already impressive debut last year. A new bar was set for online fan events, and now they just might do it again with expected reveals from a wide variety of highly-anticipated titles. On the film side, we can expect new extensive looks at The Batman and Black Adam, and the first glimpse at Aquaman and the Lost Kingdom and Shazam! Fury of the Gods. In terms of television, new reveals for Peacemaker, Titans, and Doom Patrol are on the way.

Follow along as we recap every single major reveal from DC FanDome 2021! You can stream the event on their official website or on DC’s Youtube channel. Are you excited for the future of DC? If not for some crazy reason , you definitely will be after this.

Fans were finally taken behind the scenes of Black Adam. Dwayne “The Rock” Johnson as the titular Black Adam is joined by DC heavy-hitters Hawkman (Aldis Hodge), Atom Smasher (Noah Centineo), Cyclone (Quintessa Swindell), and Doctor Fate (Pierce Brosnan). A film that has literally been over a decade in the making, hungry fans got to see comments from the jam-packed cast and exclusive footage straight from the post-production! Director Jaume Collet-Serra (Jungle Cruise) and Johnson were gracious enough to finally give everyone a good look at the famed DC anti-hero. What a way to kick off DC FanDome 2021, here’s a scene that features Black Adam entering the picture for the first time.

Aquaman and the Lost Kingdom

Jason Momoa and James Wan released a behind-the-scenes sizzle reel for Aquaman and the Lost Kingdom. Wan teases a movie that’s more “mature” but just as fun as the first. Judging from the footage shown, returning villains Black Manta and Ocean Master are going to have much larger roles than you might have expected. The exciting reel also featured a wide variety of gorgeous concept art and practical set pieces! Keep an eye out for a peek at Aquaman’s new stealth suit as well. This sequel is shaping up to be a high-stakes globetrotting adventure that will surely not only expand Aquaman’s world, but the mythos of the DCEU as a whole. Aquaman and the Lost Kingdom debuts in theaters December 16, 2022.

The long road to this project speaks for itself. Despite this tumultuous journey, the final destination is teased to have been very much worth the wait. Lead star Ezra Miller surprised FanDome with the first teaser for Andy Muschietti’s The Flash, set for a theatrical release November 4, 2022. Heavily inspired from the famed ‘Flashpoint’ comic event, the first footage sees Barry Allen sporting a new, more organic-like costume along with some new speedster gear. Through his time-warping hijinks, he comes across another Flash (also played by Miller), an alternate version of Supergirl (Sasha Calle), and Michael Keaton’s one and only iteration of Batman. The hype for The Flash just shot through the roof.

Ever since first announced, fans have been dying for more information on Blue Beetle. Exclusive to HBO Max, the film will pave the way for a whole new generation of DC films. The live-action debut of Jaime Reyes is one that is long overdue, and director Angel Manuel Soto and writer Gareth Dunnet-Alcocer are fully aware of it. Hot off his Cobra Kai fame, star Xolo Maridueña joined the filmmakers to exclusively debut the first-ever concept art for Blue Beetle himself. Throughout their conversation, the trio made clear that portraying an authentic Latine experience, full of humor and spirit, is their main objective. Safe to say that this beloved character is in good hands.

Following Blue Beetle, DC FanDome presented the other live-action film exclusive to HBO Max, Batgirl. Directors Adil El Arbi and Bilall Fallah and writer Christina Hodson, known for penning Birds of Prey and Bumblebee, were joined by lucky star Leslie Grace to dish out on this unique origin story. The directing duo spoke on the extensive search for the titular role, but Grace landed the job after impressing the two with her turnout in this year’s In the Heights. Hodson expressed excitement for writing a fresh type of introduction unlike what’s already been done with DC films. The team also promised action that feels as practical as it could be. Aside from revealing the first official concept art for the film, they confirmed that Batgirl will, of course, sport her red hair and signature cowl.

Shazam! Fury of the Gods

Asher Angel and Zachary Levi returned to FanDome to debut the first behind-the-scenes sizzle reel for Shazam! Fury of the Gods. New footage includes an in-depth look at the film’s main villains played by Helen Mirren and Lucy Liu, and newcomer Rachel Zegler who’s role is being left somewhat secretive for now. The scale has been elevated from Billy Batson’s first adventure, but still aims to be rooted with its family roots in Philadelphia. Interestingly enough, it was additionally revealed that the sequel will be fully diving into DC mythology (as the title would suggest), putting Shazam and his gang of champions up against chimeras, cyclopes, and other magical beasts. Shazam! Fury of the Gods releases in theaters June 2, 2023.

The world has been treated to their biggest serving of The Batman thus far. Robert Pattinson and Zoë Kravitz joined director Matt Reeves to talk on the film’s uniqueness, citing the famed comic ‘Year One’ as a main source of inspiration. They spoke on the film’s raw emotional core, teasing that this take on Batman is still brash and frenzied in his early career. Pattinson goes as far as to say that every punch he throws is just as full of emotion as the last. The new trailer gives more time to shine for both Paul Dano’s Riddler and Colin Farrell’s Penguin. Although, one of the real MVPs here, besides a stunning Selina Kyle, is cinematographer Greg Fraser, who may have just crafted one of the best-looking comic-book films to date. The Batman hits theaters March 4, 2022.

Nothing too juicy, but Patty Jenkins confirmed that she is, in fact, currently in the earliest of stages working on Wonder Woman 3. It’s still too early to tease much or report on anything, although confirmation was previously slightly unsure due to her previous comments on WW84 and its streaming rollout. At least it is now known for sure that she is staying on for the ride.

Fans of CW’s The Flash got their first look of Barry Allen wearing the iconic gold boots in the upcoming 8th season.

Those excited for more unhinged antics after James Gunn’s The Suicide Squad were treated to a full panel for the HBO Max exclusive spin-off series, Peacemaker. Almost everyone is already familiar with John Cena’s titular Peacemaker, and now eager fans were introduced to the new players in the supporting cast, including Vigilante (Freddie Stroma), Leota Adebayo (Danielle Brooks), and Peacemaker’s own pet bald eagle Eagly! John Economos (Steve Agee) and Emilia Harcourt (Jennifer Holland) are also returning for some more chaotic fun. James Gunn wrote the entire series, though, will only direct 5 out of the 8 episodes. On top of everything, the first full trailer was released. January 13 can’t come soon enough.

The cast of Doom Patrol celebrated their comeback with season 3 of the show already in high motion. They teased what’s still to come and shocked everyone by announcing that season 4 has already been ordered. There couldn’t be a better time to join the Doom Patrol hype train. In the meanwhile, check out what to expect from this gang of misfits in the incoming weeks below.

Season 4 of Titans is now confirmed to be in the pipeline as well. The announcement comes along with a new exclusive look at the season 3 finale – a scene that teases the inclusion of some other fan-favorite names.

Season 3 of Harley Quinn may still be a while away, but that didn’t stop Harley and King Shark from crashing FanDome with a rough sneak peek. The animation is nowhere near complete, yet the excitement is still high for the new footage reveals plenty of returning characters and spicy twists. Bane, Doctor Psycho, the Court of Owls, and the irreplaceable Kite Man! Season 3 of Harley Quinn will arrive on HBO Max next year.

One of the more obscure titles of this DC FanDome, DMZ unveiled a load of new material. Based on the comic of the same name, this dystopian series will be exclusive to HBO Max. Ava DuVernay produces and directs with Rosario Dawson as the main star. Only 4 episodes long, DMZ follows a medic who becomes a symbol for the people in a demilitarized Manhattan island during the second American Civil War.

Surprise! Perhaps one of the more surprising reveals of DC FanDome, Pennyworth has held its worth on Epix enough to warrant a new season, however, it won’t be coming back to Epix. For its third season, Pennyworth will join its brother and sister DC shows as an HBO Max exclusive. The cast of the show was excited to share the good news, and fans should be too! The streaming service’s library is growing and such exposure could give this title the attention it needs for growth.

The official trailer for the highly-anticipated Suicide Squad Kill the Justice League was unveiled. Everyone has gotten to know this game’s version of “evil” Superman, but now they get to see the other members of League that the Squad will come face to face with, including Green Lantern and the Flash.

A new extensive look at Gotham Knights is here, and it gives players their first true impressions on gameplay and the greater story. The trailer features the Penguin in an influential role, something that might have taken fans by surprise.

Read Next: The DCEU Ranked Worst to Best