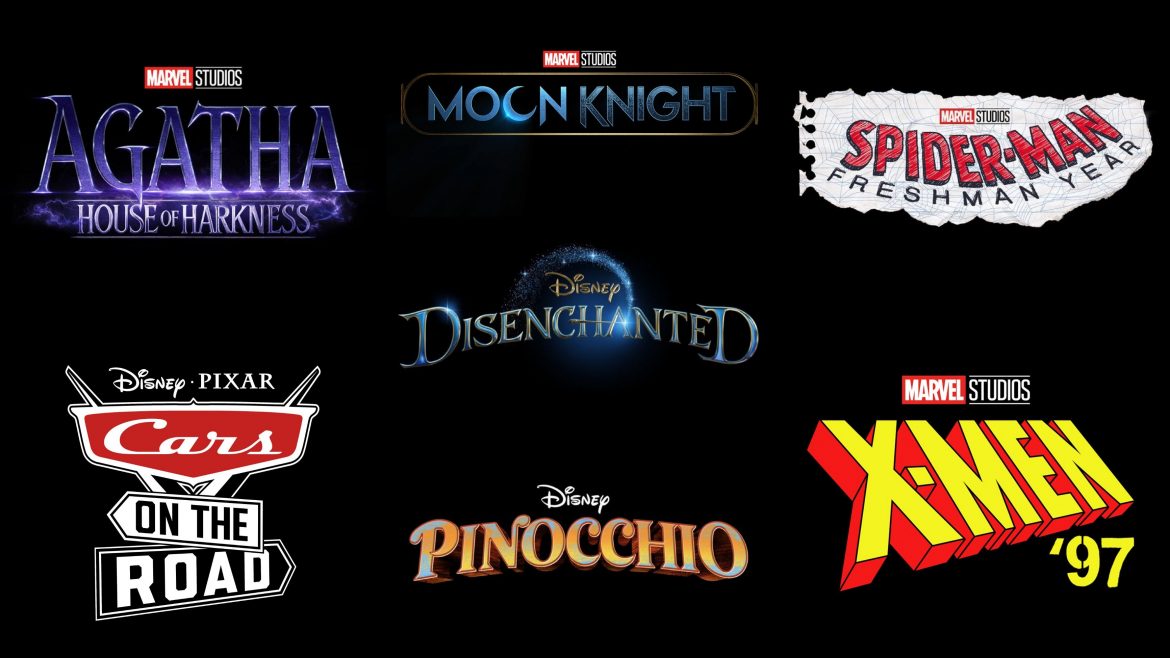 November 12th marks the second anniversary of Disney’s flagship streaming service, and the company has decided to celebrate with a day full of new releases, announcements, and teases for all things related to Disney+. A plethora of fresh content was revealed from Marvel Studios, Lucasfilm, Pixar, Walt Disney Animation, and more. Unlike last year’s lengthy, live streaming event that was Disney Investor’s Day (where certain reveals were only shown to investors, away from the public eye), Disney+ Day announcements were more widely accessible, albeit a bit chaotic to follow.

With nonstop news coming from online socials and straight from the Disney+ app itself, it was very easy to just blink and miss the next big thing. Luckily, we’ve recapped every single major announcement from Disney+ Day 2021 right here for you. Follow along as we recount exciting reveals and get you a leg up on what to expect from Disney+ in the incoming few years!

We got our hotly anticipated first look at Obi-Wan Kenobi with a behind-the-scenes sizzle reel featuring director Deborah Chow and star Ewan McGregor reflecting on the show’s development. Chow teased Obi-Wan’s encounters with Jedi hunters/Inquisitors and McGregor spoke to the excitement of returning to lightsaber combat – as well as a rematch between the Jedi master and his fallen padawan, which of course is being reprised by none other than Hayden Christensen as Darth Vader.

You can find the featurette on Disney+ here, which is full of concept art that promises a return of fan-favorite characters and planets in a galaxy far, far away.

With The Book of Boba Fett on the horizon, we got a documentary feature on the bounty hunter himself. Now streaming, Under The Helmet: The Legacy of Boba Fett explores the character’s past and present in the Star Wars franchise, and just how he’s managed to grow into icon status.

We also got the meet the cast of the upcoming Willow series with Warwick Davis, which will release in 2022.

The show will supposedly serve as a sequel to the original fantasy drama 1988 film of the same name directed by Ron Howard and created by George Lucas. Haven’t seen it? That’s okay – neither have we… but it’s never too late to change that for it’s easily accessible on Disney+!

Marvel Studios’ 2021 Disney+ Day Special brought us an onslaught of MCU content, so hold on tight. Alongside a look back at the shows released on Disney+ over the past year, fans were treated to announcements and new looks at upcoming titles. Here’s a few:

We got the first official look at Oscar Isaac in Moon Knight, and fans are totally going crazy, as expected.

We also got a peek at everyone’s favorite big green lawyer in She-Hulk.

Next up, Kamala Khan made her debut in our first look at the Ms. Marvel series.

Additionally, we got some exciting updates for the future of animated content at Marvel Studios, including the announcement of two new titles.

We will soon see Tom Holland’s Spider-Man go back to school in Spider-Man: Freshman Year, an animated original series set in the MCU following Peter Parker’s early days as the web-slinger. You can count on his prototype-hoodie costume making a comeback.

Marvel Zombies will bring raise the dead in animated TV form yet again – something that will excite fans of What If…?, for which a second season was announced as well.

I Am Groot was once again mentioned as a series of shorts that follow Baby Groot growing up.

We learned that the scene-stealing villain from WandaVision will return in Agatha: House of Harkness, an all-new original series coming to the platform. Other additional upcoming programs include Secret Invasion, Ironheart, and Echo – which is confirmed here by the studio for the first time. Those unfamiliar with Maya Lopez, a deaf superhero who is a frequent partner of Daredevil, will want to tune into Hawkeye in the incoming weeks.

As a bonus treat, our first look at Secret Invasion came in the form of an eye patch-less, scruffy-looking Nick Fury:

A bit of a diversion from the interconnectivity from the MCU, it was announced that the classic X-Men: The Animated Series team will be revived with much of the same returning voice cast in the upcoming X-Men ’97. The nostalgia seems to be at an all-time high, as fans new and old are rejoicing to see this beloved show return with its original 90s roots intact.

To top it all off, Shang Chi and The Legend of the Ten Rings is now available free for Disney+ subscribers to stream.

Pixar’s Disney+ Day gifts were offered up by Chief Creative Officer and all-around animation guru Pete Docter in their platform-exclusive special featurette as he gave a fun tour of Pixar’s headquarters.

Voice of Tow Mater himself, Larry the Cable Guy was the first guest, brought on to announce the all-new series Cars On The Road. “A cross-country road trip between McQueen and Mater,” the show is set to come out next year on Disney+ with Owen Wilson also reprising his role as Lightning.

We were then treated to the announcement of two separate feature-length behind-the-scenes documentaries following the respective productions of Turning Red and Lightyear.

We additionally got some more information on Win or Lose, Pixar’s first long-form series. From directors Michael Yates and Carrie Hobson, the show follows a middle school co-ed softball team as they come up to a big championship game.

Furthermore, we learned that each episode will follow a different character over the course of the same week before the game, and we were treated with some concept art and animatics to get a taste of what’s to come.

Walt Disney Animation has some big things coming, and we couldn’t be more eager. Their Disney+ Day announcements consisted of the reveal of several new titles and more.

Fans of the 2016 animated film were pleased to hear about the announcement of Zootopia+, a short-form series set in the “fast-paced mammal metropolis of Zootopia,” coming to the platform next year in 2022.

The first trailer for Baymax! was released too. The upcoming original series will feature characters from the beloved Big Hero 6 and is coming Summer 2022.

We also got a first look at Tiana, a series following the newly crowned Princess of Maldonia as she navigates her new life and New Orleans past. The series is set to release in 2023.

The Disney+ Day helpings from the studio formerly known as 20th Century Fox included some first-looks at some surprising, but much welcomed titles.

The Predator franchise is back with Prey, a prequel film directed by Dan Trachtenberg (10 Cloverfield Lane). As we’ve exclusively reported before, the project stars Amber Midthunder and takes place 300 years ago in the Comanche Nation. Prey will debut on Hulu in 2022.

For fans of Romeo and Juliet, we got a first look at Rosaline starring Kaitlyn Dever as the titular character. The film features the iconic story told from the perspective of Romeo’s ex-girlfriend and Juliet’s cousin, making for an interesting new take on a familiar romance.

From director Le-Van Kiet, The Princess starring Joey King is also coming to Hulu in 2022. An “irreverent action movie set in a fairy tale world,” the film will follow a battle-ready princess breaking free of stereotypical expectations to protect her kingdom.

Suspense-thriller film No Exit will find itself on Disney+’s more mature cousin platform Hulu in 2022 as well. It will star Havana Rose Liu and be directed by Damien Power.

In addition to a new poster for Diary of a Wimpy Kid, coming to Disney+ December 3rd, we also learned that another animated adventure is coming to the platform titled Rodrick Rules.

The Spiderwick Chronicles are coming to Disney+. The adored series of imaginative field guide-styled books featuring a world full of fantastical creatures is coming to the streamer as a live-action Original Series. Very exciting!

Season 3 of High School Musical The Musical The Series was confirmed to be coming in 2022 and was teased to feature songs from Disney’s Frozen. It will follow the characters during the summer at a sleep-away camp.

The long-awaited sequel to the Amy Adams and Patrick Dempsey-led modern fairy tale, Disenchanted was announced to release Fall 2022 to Disney+. The original film Enchanted is also now streaming.

John Mulaney and Andy Samberg are set to take on the voices of Chip and Dale in Chip ‘n Dale: Rescue Rangers, a live-action/CGI film coming to Disney+ Spring 2022.

We got a new still from Hocus Pocus 2, which will hit the streamer late next year.

A first look at a new original movie coming to Disney+ next year, Sneakerella, was released.

The first clip from Peter Jackson’s The Beatles Get Back was released.

And that just about wraps up the major announcements and reveals! You can see what else was released for Disney+ Day and what’s in store for the rest of the month of November here. To end this recap, you can check out all confirmed released dates for upcoming Disney+ titles below.

Cheaper By The Dozen Remake, March 2022

Under the Helmet: The Legacy of Boba Fett Special, Now Streaming