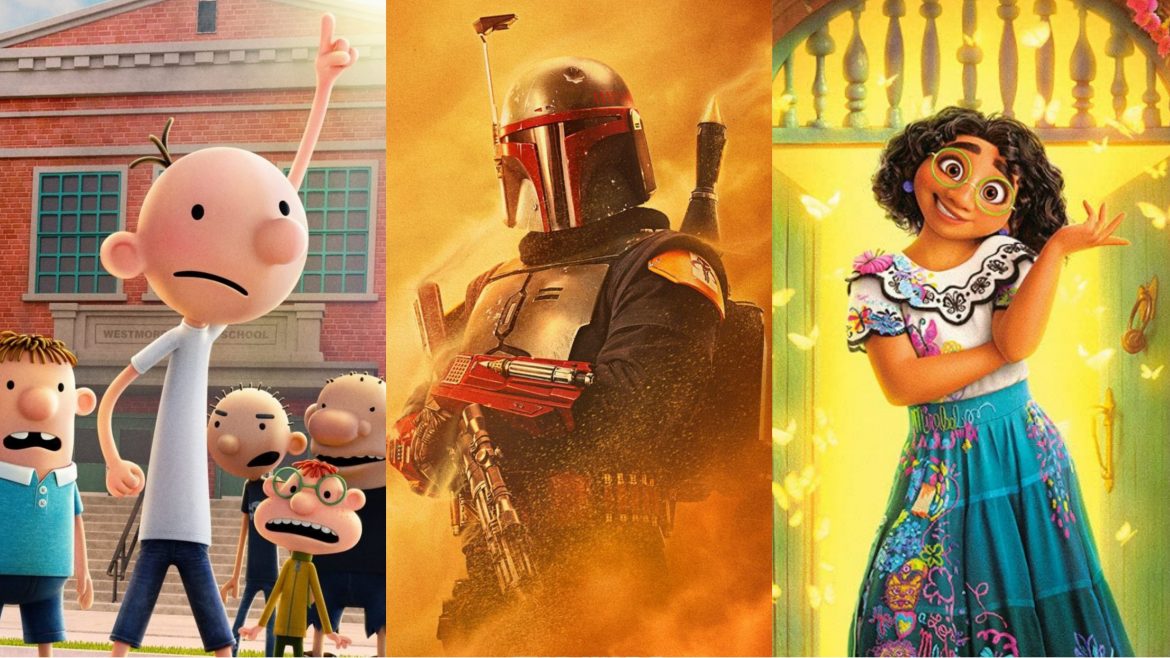 Hot off the content explosion that was November 12’s Disney+ Day, December 2021 may seem like a pretty quiet month for Disney+, but don’t be mistaken; there are plenty of new shows and movies coming soon to occupy your holiday season.

This month will see the rest of Hawkeye release, continuing the story of Clint Barton and Kate Bishop as they make friends and foes navigating the New York City underworld during Christmas. And only a week after it finishes, the premiere of The Book of Boba Fett will pick up where the post-credits scene of The Mandalorian season 2 left off, following the bounty hunter on his rise to criminal power as the new gang lord of Tatooine.

Looking for some new movies to check out? Look no further: Encanto and Diary of a Wimpy Kid are coming to Disney+ this month, along with a number of new holiday specials. Subscribers will also see some beloved blasts from the past hit the platform, with titles from Ice Age to Tron: Legacy making an appearance. If documentaries are more your thing, The Rescue is the latest film from the team behind the Oscar-winning Free Solo.

Like always, Disney+ promises to have a little bit of something for everyone coming this month. Get more on our recs along with the full list of everything coming to Disney+ in December 2021 below. This month’s new additions and exits from Netflix and HBO Max can also be found right here on DiscussingFilm.

Diary of a Wimpy Kid

The latest adaptation of Jeff Kinney’s hit series imagines the now-iconic Greg Heffley in 3D animation, modeled in homage to his classic sketchbook style appearance in the original books. Bringing the vocal talents of Brady Noon, Ethan William Childress, and Chris Diamantopoulos, this film is the beginning of a new Wimpy Kid franchise on the platform.

It was announced on Disney+ Day that fans can expect the next film, Diary of a Wimpy Kid: Rodrick Rules to premiere next year (2022) on the streamer!

Diary of a Wimpy Kid debuts on Disney+ December 3!

Walt Disney Animation’s 60th feature film, Encanto follows the Madrigal family, who reside in an enchanted town hidden in the mountains of Colombia. Bestowed with magical abilities, everyone in the family has their place – except for Mirabel. A story about family, self-love, and overcoming internal conflicts, Encanto has its eyes on some pretty heavy subject matter, but “mixes these pivotal life lessons with plenty of fun moments and exciting music” by songwriter Lin Manuel Miranda.

A month after its theatrical release, Encanto will hit Disney+ December 24!

The Book of Boba Fett

Everyone’s favorite green-armored bounty hunter will return to Disney+ in The Book of Boba Fett; the latest show set in the Star Wars universe from executive producers Jon Favreau, Dave Filoni, and Robert Rodriguez. Starring Temuera Morrison as the titular character and Ming-Na Wen as Fennec Shand, the series is set to depict Fett making a name for himself by taking aim at the power vacuum created by Jabba the Hutt’s death in Return of the Jedi and establishing dominance throughout the galaxy’s criminal underworld.

Fett fans rejoice, for The Book of Boba Fett premieres on December 29 – only on Disney+

Check out what’s also coming to the following streaming services throughout December 2021: