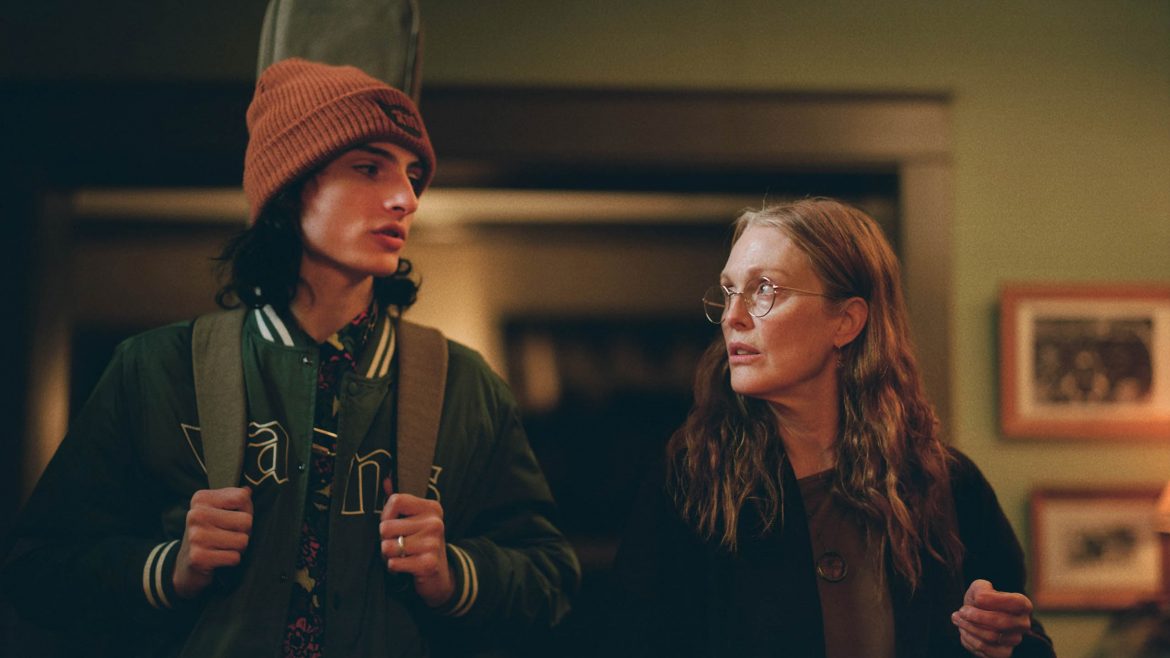 In his feature directorial debut, Jesse Eisenberg adapts his own award-winning 2020 audio drama of the same name, When You Finish Saving the World. Most known for his eccentric acting roles on screen, Eisenberg has been long making a splash in the worlds of theatre and writing, with 3 plays and one book under his name. It was only a matter of time until he made the big leap to the director’s chair on film, so adapting one of his own works seems like a safe bet to start off. And it is, for the final product, backed by A24 and Emma Stone in a producing role no less, sees Jesse Eisenberg’s indisputable voice front and center. Though when looking beyond that, there’s not much left to support the case for this adaptation. Maybe too safe of a bet for a debut, When You Finish Saving the World has its strengths but still leaves much to be desired.

Eisenberg makes notable changes to streamline the narrative of his audio drama for a film format, yet the core aspect of a lost family trying to regain their sense of self remains intact. The film focuses on the relationship between Ziggy (Finn Wolfhard reprising his role from the audio drama) and his mother Evelyn (Julianne Moore), two out-of-touch, self-centered souls whose narcissism is the only thing driving them forward. Ziggy is a wannabe social media influencer who uses his platform to premiere his latest acoustic ballads, while Evelyn is the long-time head of a shelter for victims of domestic violence. Even though she’s leading a great cause, her years at work have desensitized her emotional responses and put her on a moral high horse of sorts, where she thinks she knows exactly what to say to who as if it was written in a script.

Despite seemingly being worlds apart, the parallels Eisenberg finds between this strained mother and son duo make for the most appealing aspect of When You Finish Saving the World. The generational divide is one thing, with Ziggy’s main concerns being the intangible (such as clicks and subscribers) and Evelyn’s being the more palpable (like a full-time job), but the complete disconnect from reality is a whole other. The two’s performative, somewhat robotic nature makes for hilarious bone dry humor, familial awkwardness that is totally Eisenberg’s doing. The ways in which kinship is portrayed, how mother and son can still find solace in each other even after all the yelling and not seeing eye-to-eye, feels genuine thanks to two dedicated turnouts from Wolfhard and Moore. With a parent-child relationship as comically flawed as this, often feeling quite real despite their own chaotic natures, it’ll be what people want to remember this film for the most.

Now, Wolfhard and Moore are evidently doing a lot of the heavy lifting here; their charm and devotion to these peculiar characters can only go so far when Eisenberg starts to mess around with the film’s political undertones. A reoccurring theme in When You Finish Saving the World is the need to project one’s voice and opinions onto someone else, and the script explores this through modern liberalism – which is often amusing when seen through Ziggy’s skewed eyes. His high-school crowd is all about going far-left, and being as egotistic as he is, Ziggy tries to fit in and go “woke or broke” for the sake of his online persona. It’s funny enough at first, but as the script keeps going further with tackling what’s essentially the current trend of neo-liberalism (vocalizing a cause without ever really acting upon it in any way) things get muddled. Dialogue starts to sound way too unnatural and one isn’t sure if they’re laughing with or at the movie’s politics – which leaves it feeling hollow.

Going further, it’s not very clear as to what Jesse Eisenberg is actually trying to say with these politics, to the point where it kind of seems performative itself in an ironic way. His characters are obviously in the wrong until they suddenly aren’t, leaving viewers asking “that’s it?” by the end. For his first feature, Eisenberg is clearly finding his own rhythm and tones. And even though his distinct voice is present, seen in its dry humor and themes of familial bonds carried over from the original audio drama, there just isn’t enough to back everything up here. If anything, Eisenberg shows some promise as a film director, with him capturing the most out of Wolfhard and Moore’s committed performances on camera. Perhaps audiences will get to see more of his directing potential once he steps further out of his comfort zone as a storyteller.

When You Finish Saving the World is still a decent, light-hearted debut in spite of its weaker elements. It may not be what people expected with all of the talent involved, but Finn Wolfhard and Julianne Moore elevate the material to the best they can. One just hopes that Jesse Eisenberg’s messaging and intent will be much more defined down the line. Those who can relate to its modernized story of a distraught family will find something poignant to take away from When You Finish Saving the World, if the mixed politics don’t turn them away first.