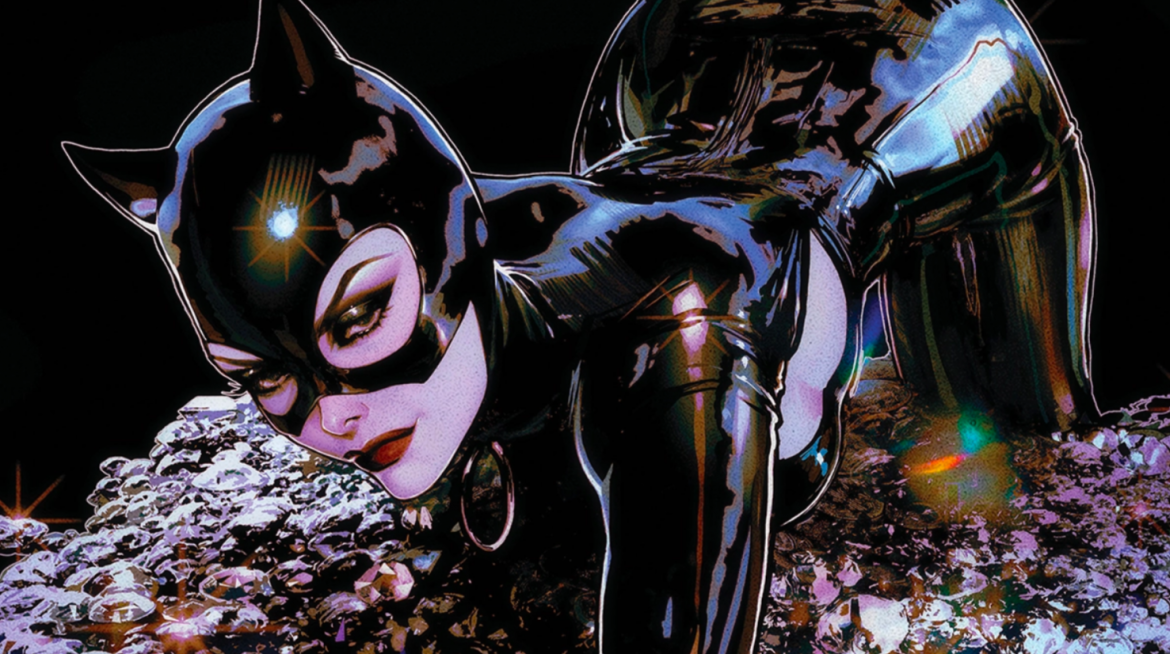 Catwoman. One of Batman’s very first villains, a glamorous international thief, a vigilante in her sole corner of Gotham, the brief head of a mafia family, and don’t forget, a candidate for mayor of New York City. Where could you go next with Selina Kyle when she’s lived so many different lives? It’s a staggering question, especially for a female writer, when past books have been riddled with notoriously objectified art, an insistence on male love interests several decades older than her, and varying origins that layer as much class, gender, and sex-based trauma onto the character as is possible. Not to mention her polarized characterization that changes every other month: either the sincere, guilt-ridden defender of the East End (if we’re lucky enough) or the reckless rebel without a cause who just can’t help but play Russian roulette with her own mortality.

Enter Tini Howard, who proudly announces in her Substack newsletter that she has an answer in “dressing rooms and bedrooms” and “delicious, fearless, femme, dark, queer, deadly” femininity. And yet, for all those descriptors, Howard’s debut offers readers the same tired look at the social issues that it insists it subverts with loud desperation, served up on an “empowering” Barbie hot pink platter.

Both an introduction to a new story that already feels redundant and a pale attempt at a commentary on sexism that categorically rejects the idea of subtlety (or the very basic “show-don’t-tell” writing approach), Howard’s first issue is an utter mess. After her guardianship of Alleytown ends in disastrous flames, Selina traces the corrupt money back to the ‘white-tie’ crime families of the city’s upper-class neighborhoods and attempts to blackmail them into compliance with her terms. Don’t let that straightforward summary deceive you; the story’s structure is weakly crafted, characters are introduced as male chauvinist clichés in rapid succession, and style completely obliterates substance with narration reduced to tongue-in-cheek soundbites.

Exposition is overwhelmingly crowded into every page’s corners, detailing new characters and settings, which become even more muddled when told through Selina’s tawdry inner commentary (“And I know you all had fingers in the pie that got pinched when I slammed the window shut,” Selina says to the mob family heads, as part of her blackmailing threat). We shuffle from point A to point B to point C and back to point A then to point D without grace but still with great difficulty, as the narration over-extends itself for a bombastic voice even with the smallest of details. At least with other mediocre stories, you have the option to skim and still understand 80% of the events. Yet somehow, this isn’t the issue’s largest problem.

Mainstream comics have always been behind the curve in addressing social issues, patiently waiting for more commodified, palatable versions of political rhetoric. DC has accelerated their timeline in recent years, with a wave of stories that decontextualize recent social upheavals for universe-wide events, and updates to existing characters that neatly package race, sexuality, and gender identity into a checklist. A newly-minted billionaire Dick Grayson (Nightwing) tackles class inequality by buying pizzas for everyone in his neighborhood; a recently-announced bisexual Jon Kent (the current Superman) solves every marketable cause with ease on a monthly basis, saving refugees from arrest by simply appealing to the hearts of the police. In that same supposed revolutionary vein, Howard offers up a redundant proposal: what if Catwoman is a feminist?

Centering ideas of women’s perceived incompetence and violent objectification should provide a riveting perspective in a Catwoman book, for these topics are deep-seated in her origins. Instead, it reads as self-satisfied and lifeless; Howard is very much interested in reminding us, in every other panel, that the author knows how women are undermined in every sphere of their life, but not so much on how that affects Selina. There is a stubborn resistance to any degree of interiority.

The issue opens with four of the family heads gathering at a neon pink cat-themed strip club to discuss business and make passes at the waitresses. Rather than have her steal from the mobs, Howard decides that this is the perfect location for Selina to blackmail all of the families at once. These first pages give the reader no time to digest who the key players in Gotham are, as the dialogue immediately launches into volleys of degrading comments (“Tell me honey, d’ye read Sun Tzu?”) and undermining snides (“Thankfully, Miss Eiko’s smart enough to appreciate the gift of a beautiful woman’s company.”)

From this, the rampant sexism in this circle has been established, but Howard feels the need to tediously repeat it, in every predictable beat, panel after panel, until they seem like a compilation of Adult Swim cartoons. Catwoman’s long-time enemy Black Mask interrupts the stand-off with a machine gun, easily knocking her back with one blow to the stomach. There’s no need to worry, for she’s able to escape, and someone else does the actual stealing; a mysterious, expensive-smelling gentleman, Valmont, generously gifts her with each of the four family’s symbolic weapons of power. A stark contrast to the other men in the book, this fellow thief actually admires Selina, and of course, is respectful of her boundaries.

By the fourth wave of feminism, it should be a given to approach one of pop culture’s most sexualized characters with depth and sincerity. Howard attempts to build a caricature of a Man’s World to somehow topple later, only to shun Selina’s self-control and diligence as a thief, survivor, and vigilante – it doesn’t work.

Where Howard insists that readers grimace at the other mob bosses’ treatment towards Eiko, she then writes Selina mocking one of the young mob wives, Yulia. (“She says Dragos doesn’t listen to her ideas, he’s just a styoopid peeg. Imagine that.”) The waitresses and sex workers yell, “We don’t need anyone to save us!”, only for Catwoman to point out that they are obviously being shot at. The audience’s skin is supposed to crawl at how these men believe all women are incompetent, yet Howard effectively removes Selina from the playing field and demotes her to only passively react to the chain of events. It’s a conscious writing choice to have Selina knocked down within one panel, to have someone else steal the key weapons, to have her gifted the leverage against the other mob bosses. There is no active critique of our structures or our world, only hollow snark. Objectification is condemned with the revelatory choice of embracing more objectification. As long as we say it’s a feminist choice, then it’s fine and it becomes a decision that exists in an isolated, structural vacuum, Howard seems to think.

What value comes out of these writing choices for Selina, as the Catwoman and as a female character? Who does this serve, the publishing company and writer or the character and audience? It’s not that a grand manifesto is expected within a single issue, let alone the first issue of a run. The intention here is not to pinpoint plot holes or flatten a story into logical terms or speak in ‘what-if’ or ‘why-not-this’ hypotheticals; it is to identify and question who is given the opportunity to be catalysts in the narrative and whose agency is respected. In an internal dialogue that is almost bloated with personal grievances about being undermined, Howard seems to insist on doing the same with Catwoman. There are marked differences between challenging a character’s abilities and cutting them off at the knees.

From Ed Brubaker’s commentary on class and systemic violence to Genevieve Valentine’s portrait of a woman struggling to hold onto her identity and power in a world built to outmaneuver her, past writers have proven that a Catwoman story can handle political philosophy and remain emotionally moving. But only if the holder of the pen has the vision and the intention.

This isn’t a complete dismissal of the upcoming arc – it’s a story that could at least reach mediocre quality if Howard got out of her own way and focused on weaving these multiple threads together. The return of many notable figures from the past, from Selina’s first-ever female love interest, Eiko, to the deeply violent Black Mask, could still bring the thrilling tension it should have brought to every panel here. This debut feels like Howard’s grasp of the character is merely rooted in the shiny leather catsuit and nothing else, but the next three issues of the arc may be intimate enough for readers to understand her actual interpretation of Selina, if it exists.

As it stands now, with this one issue, the new creative direction already feels culturally stale. Feel free to continue reading to see where Howard takes Selina, or go revisit the equally exhausting early stories from Catwoman’s widely-despised New 52 book to get a glimpse of what likely lies ahead.

Your favorite, not-too-uptight cinephiles working every day to shape the film discussions of tomorrow.