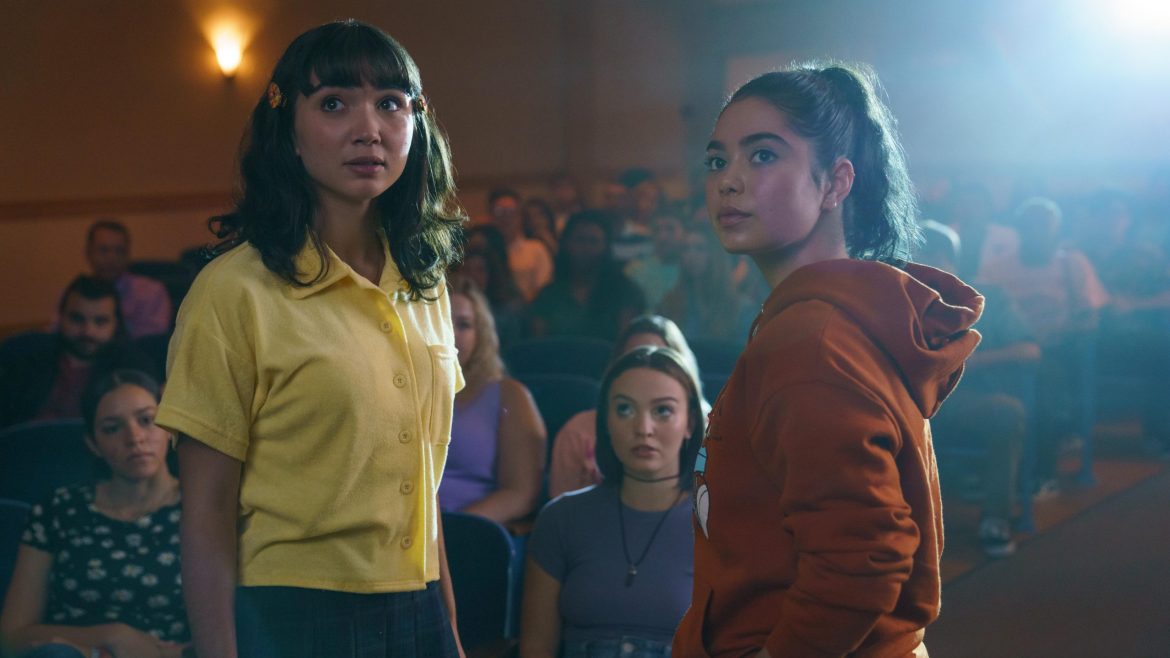 Though only 21, Auli’i Cravalho has established herself in Hollywood as a multitalented and accomplished actress. She made her debut in 2016 as the titular character in Moana, and since has starred in projects such as All Together Now, Rise, and The Little Mermaid Live! Her upcoming film, Crush, is a LGBT teen rom-com slated for a release on Hulu April 29th. Cravalho plays track team co-captain, AJ. After Rowan Blanchard’s character, Paige, signs up for the team on a personal journey to discover love, the two are forced to work together and, in doing so, make discoveries about each other and themselves. Lighthearted, sarcastic, and self-aware, Crush is a comedic reflection on discovering sapphic love in high school and the queer culture surrounding it.

A far cry from her reserved character in Crush, Cravalho has a disposition as radiant as her smile and we were fortunate enough to talk to her about not only her upcoming film, but future hopes for her career and her experience with The Power, the next TV show she is starring in for Prime Video.

Auli’i Cravalho: I really enjoyed connecting with my character, AJ. It was really important, when I first read the script, that I was able to play a character that I had never played before. Also, when reading the script, I thought the humor was so on the nose and so Gen Z, and I’m Gen Z, so I was really excited to play into that. I loved that our story also didn’t center around a coming out story. All of these important notes popped up, and I was like, “I want to work on this project, for sure.”

I graduated high school in 2016, and teen movies now and teen movies then are different in terms of humor and the amount of representation. How do you feel about that shift and what do you think made it possible?

Auli’i Cravalho: I agree with you. I remember, the movies that I grew up with were Mean Girls, Legally Blonde, and those kind of classics. There was always someone being the butt of a joke. I think what’s changed is, obviously, more diversity and inclusivity. As far as the actors on screen, which thank you very much, I’m very grateful to be included in that as someone who is a young woman of color, as a Hawaiian, because we don’t have very many Hawaiians in this industry, and as a young queer actress, as well.

But I think what’s really changed, and something that Crush touches upon as well, is that you have to have the representation behind the camera. So for Crush, I was telling you that the script, oh my gosh, it’s just so funny! The queer humor is written in so well, and it turns out our writers, Kirsten King and Casey Rackham, are queer. Our director, Sammi Cohen, is also queer. It just started to make sense that, “Oh, of course, this voice that I’m hearing through the script is true and genuine, because it’s written by people who have lived this experience.” What’s changed with rom-coms and teen movies is that the people writing these films share more life experience with the characters that they write for.

Auli’i Cravalho: I would agree with that. I don’t know the ins and outs of this industry; I’m still pretty young. But I’ll be honest, I also grew up without TV. So I would have to agree that streaming has helped me to be able to just hop on my phone and watch TV. I still don’t have a TV in my house. I do see a difference in the amount of media that I consume because I never watched cable or movies that even came into theaters. This whole world of streaming has opened up so much more for me.

Auli’i Cravalho: I would say Sex Education. That’s my my recent favorite. They tackle so many difficult conversations with humor, and humor is sometimes life saving, especially for the queer community when we feel that these conversations are so taboo. Yeah, I think Sex Education is a really fun and freeing way to have sex-positive conversations.

You got your start in voice acting, and now you’re doing more on-screen roles. I am a fan of Moana, but what have you enjoyed the most and what kind of genres do you still want to try? Do you want to maybe do a live-action movie musical?

Auli’i Cravalho: I loved working on Moana. Yes, Moana was my my first job, my first big push in the industry, it helped a lot. Voice acting always has a really special place in my heart because it just comes naturally. To put on a character voice is so fun, and you’re just like, “I have to prove that I’m showing excitement in my voice!” Like, it’s just fun. But for live-action, it’s always a challenge for me. I would say that I want to continue in the live-action space and also getting into more physical roles. Because for Crush, my character AJ is one of the co-captains of the track team, so I was like, “Uh-oh, I have to practice running.” So I practiced literally running, which is weird to say, but I also took skateboarding lessons. I learned a lot through the physicality of playing AJ and I enjoyed that. I think moving forward, musicals are very fun, but they’re kind of a safe space for me. I want to do things that are challenging, and for me, challenging means more physicality.

One of your next projects is The Power. What can you tell us about it?

Auli’i Cravalho: Yes, so I finished shooting that a while ago. Time is not real. I filmed that in London with John Leguizamo, Leslie Mann, Gerrison Machado, my brother, and Pietra Castro, my sister – they’re wonderful. Waiting for it to come out! It’s based off the book by Naomi Alderman of the same name, The Power, and it speaks to a world very similar to ours, like set in today, right now, where young girls and women suddenly have the ability to electrocute people at will. It explores that power of electricity, but also how power structures change when women have a strength over the opposite sex. It’s very fun, and it’s so timely. I’m just twiddling my thumbs waiting for that one to come out. That also had physicality to it – like there’s the feeling of energy behind your palms and stuff like that. It’s just fun to be a superhero.