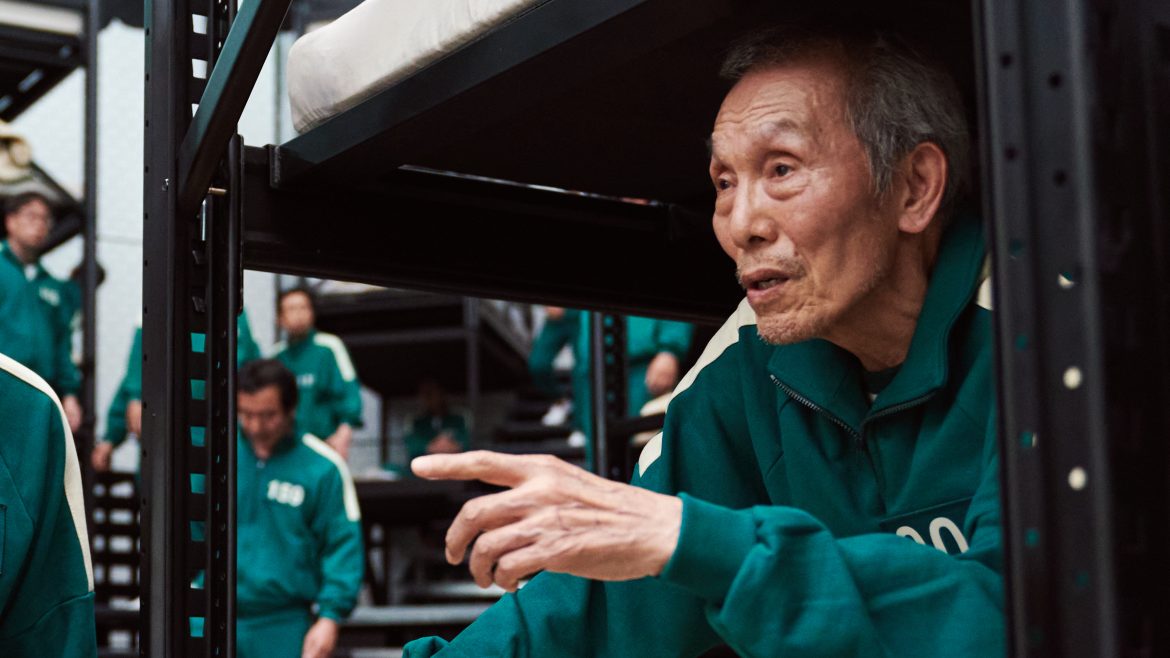 Squid Game is not just the biggest Korean export from Netflix, it’s the biggest Netflix series of all time period. A large part of that is due to the eclectic cast of characters, none shining brighter than the sweet old man later revealed to be the mastermind of the games, Oh Il-nam. Despite a large background in theatre and many screen credits to his name, the actor behind the role, Oh Young-soo, is being seen for the first time by most audiences, who have immediately embraced him.

Oh Young-soo made history this year as the first Korean actor to win a Golden Globe, taking home the statue for Best Supporting Actor, and is now up for the same title in the drama series category at the 2022 Primetime Emmys. Squid Game is already expected to make more history at this year’s Emmys, but a win for Oh Young-soo would additionally cement the character of Oh Il-nam as one of the best TV villains of our time, no doubt about it.

Following our exclusive conversation with fellow Squid Game star Park Hae-soo, we were lucky enough to sit down with Oh Young-soo and discuss his method, Korean representation in the arts, childhood games, and the peculiar journey his character went through this season, as well as dropping some juicy teases for what series creator Hwang Dong-Hyuk is cooking up for Squid Game Season 2.

You have a storied background in theater. However, Squid Game is the biggest media production you have been a part of. How did you adjust to that and how did your experience in theatre inform your performance?

Oh Young-soo: I think theater is like the base of all kinds of acting. TV, media, and drama, all sprung from theory in the beginning so I don’t think it was like a whole new start for me because I had these piled-up experiences inside of me. I moved on from doing some exaggerated acting when I was little to now more natural. I think acting that looks like you’re not acting is the really good kind of acting. So I didn’t really have to had to adjust from theater to drama. I thought it was on the same level. And it just came to me naturally because theater acting is always the base of all kinds of acting.

One of the greatest appeals of Squid Game is that it strikes a great balance between the fun of the childhood games and the bloodshed. What kind of environment did that create on set?

Oh Young-soo: I would actually like to talk exactly about what you asked. I think it’s that balance that made it so entertaining because without the symbol of [the central] “Squid Game” and the symbol of children’s games and being so nostalgic, the violence and the bloodshed wouldn’t be anything if it weren’t for the symbols. So I think that’s what made it more entertaining. The set and [its] structure were also very well made so it was fun to film as well.

Are there any childhood games in particular that you would like to see incorporated in Squid Game Season 2?

Oh Young-soo: Well, for the games that were in season one, I remember playing them when I was young, when I was little. I don’t know what else I could think of. But Director Hwang [Dong-Hyuk], I don’t think he would have invented new games [for the upcoming season]. I think he would have gotten some new games from his childhood and he actually told me that he has some that are more dramatic. So I’m looking forward to it.

Wow, that’s exciting! It’s got to be fun to get to watch as a fan. Now, you by far had the most difficult job of any actor in Squid Game because you basically had to play two different characters. You had to play the friendly, youthful-in-spirit “Number One” that we meet in the game, and then the ultimate mastermind Oh Il-nam. How did you consolidate these two characters together and what challenges did that pose?

Oh Young-soo: You talked about how Il-nam could be just two totally different people, but I think everyone has both of them inside them. Inside of me, Oh Young-soo, there’s the good part and the evil part and it’s just a matter of that level of evilness inside you but everyone has, you know, some kind of evil inside them. So I did not think of the old man as someone who’s totally different from me. And he has many different facets to him.

He has dementia, he could be violent, and he has a lot of power. And we are actually of similar ages, Il-nam and myself. So actually, it wasn’t that challenging because he has so many different sides to him. If I was asked to convey him in a consistent manner, I think that would have been difficult, but because he has so many different facets and sides to him, you know, sometimes I portray him as an old man who has dementia. Sometimes I portray him as someone who has a stroke, or someone who could be evil. So because of this diversity, that actually made my job easier.

One thing I want to know about Oh Il-nam is, in his final moments, we see him make that wager with [series protagonist] Seong Gi-hun that no one is going to come to save the freezing man on the street. However, as Il-nam is dying, he potentially sees that the man is being saved. Do you think in his dying moments Oh Il-nam had any sort of change of heart?

Oh Young-soo: So actually some viewers thought that he didn’t see the people come to help and he died before someone came for the homeless man. So it depends on how you viewed the last scene but I think that while Il-Nam said that nobody is going to come to rescue the homeless man, deep in his heart, he had hope that someone would actually come for that guy. I think that’s what he was thinking. So when someone actually came to the rescue he probably thought “Oh, finally” and then died. That’s what I think because although Il-nam is like the evil villain mastermind behind everything, I think he also had another side of him that rooted for the goodness in people.

How do you think Oh Il-nam’s death is going to affect Squid Game Season 2 and what shadow do you think it will cast over the games and Lee Jung-jae’s leading character?

Oh Young-soo: I believe Oh Il-nam now will be deep in the consciousness of Seong Gi-hun. And I think Gi-hun made some personal growth due to Il-nam. I think that’s going to impact how he views life, and how he makes relationships with other people in Season 2. I think Season One of Squid Game was mostly about incidents that happened to Gi-Hun; the external factors that were at play in his life. But Season 2 will be more about how he views himself and how he shapes his own life.

You are the first Korean actor to win a Golden Globe Award. That’s a massive deal, also counting your recent Emmy nomination as well. How has that affected you? And do you think we’re seeing a positive trend towards Korean representation in international media?

Oh Young-soo: Yeah, definitely. I think it’s a positive trend. I’m very honored personally to receive the Golden Globe award. You know, with Korean content going global, I think it’s not a coincidence. It’s coming from all those years of hard work that we’ve put into the industry and we have so much experience and expertise plus the digital era is giving us a platform to play on. So I think everything has worked very well and now Korean content is resonating with the whole world. Sometimes I like to say that instead of us being within the world, I like to say that there are worlds within us. I hope we can go forward and exchange our cultures back and forth and share everything together. The world is one, right? We are one altogether. I hope the whole world can come together and enjoy everything together.

For this last question, I’m going to ask a fun hypothetical for the fans. If you hadn’t sacrificed yourself in that game with the marbles with Gi-hun and you had beaten him, what would the game have looked like after that?

Oh Young-soo: If I didn’t sacrifice myself, all of the drama would have just ended there. But I think Il-nam probably saw the goodness in Gi-hun and that’s why he wanted him to live. He wants to see what he can do because Gi-hun is a person who led a life that Il-nam could not lead, so I think he wanted to see him going forward. I think that’s exactly what the director thought as well, and that’s why we see me stepping down.

Squid Game Season One is streaming only on Netflix!