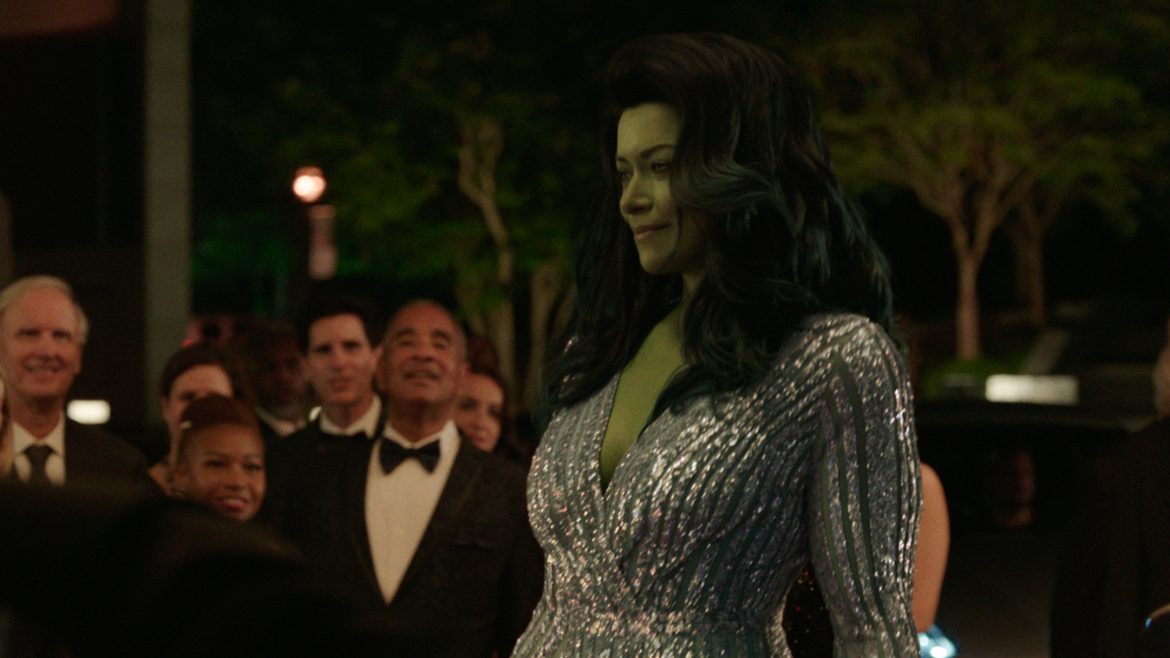 Following the release of seven Disney+ shows, She-Hulk: Attorney at Law brings yet another new leading hero into the Marvel Cinematic Universe – one that’s been overdue for a proper spotlight. Jennifer Walters, who Stan Lee first introduced in The Savage She-Hulk #1 in 1980, is quite the significant Marvel icon; when she isn’t serving justice in the courtroom she’s either with the Avengers, Fantastic Four, or more recently, the beloved A-Force team. As the cousin of one of the original six MCU Avengers, Bruce Banner, it was only a matter of time until Jennifer Walters was introduced to wider audiences in this franchise.

Cast in the show’s titular role is Tatiana Maslany, who is best known for headlining Orphan Black in which she impressively played 14 different clones, each with a unique personality. Those who watched any season of the sci-fi thriller series know that Maslany’s talent is undeniable. As Jennifer Walters, Maslany knows how to command every scene, making for a multi-faceted self-made hero who is humorous, relatable, and charming. Her story taps into a fresh perspective of celebrity culture and fame in a universe that has since become mundane to the presence of superheroes and life-threatening evil, as well as the real-world trials of being a woman in a male-dominated profession.

The first episode of She-Hulk: Attorney at Law plays out as Jennifer Walters’ origin story, playing out similarly but not totally identical to how she gains her Hulk persona in the comics. Frustratingly, in the very first episode when we, as viewers, are meant to be forming our initial impressions of Jennifer as a protagonist, Bruce Banner becomes a distraction from her story as a supporting plot device. Audiences will have to stick out the slow-burning introductory episode of She-Hulk: Attorney at Law to thoroughly enjoy what follows as the titular character’s own origin is the weakest element of the series thus far.

As the plot moves into Jennifer Walters’ fourth-wall-breaking, everyday routine as both an attorney and rookie vigilante, for which head writer Jessica Gao cited Fleabag as a clear inspiration, a promising ensemble of supporting characters is introduced. Considering the reasonable amount of marketing surrounding her character, Jameela Jamil only makes a brief appearance as Titania in the show’s first four episodes. The series sets her up for a bigger presence in the second half of its nine-episode first season, but her introduction would have been more captivating if she quickly became a more active presence within the story, as opposed to being immediately cast aside until the future.

The visual effects landscape in Hollywood has been a prominent topic of discussion recently after an anonymous whistle-blower broke down their experience working on Marvel projects with Vulture. The reception to She-Hulk’s design and visual presentation was intensely decisive after audiences got their first real good look earlier this year. She-Hulk: Attorney at Law director Kat Coiro spoke against this criticism shortly after, saying, “I think a lot of the critique comes from feeling like they’re able to tear apart the CGI woman. There’s a lot of talk about her body type and we based it on Olympian athletes and not bodybuilders”. Although, the issues with the show’s VFX do not lie in She-Hulk’s design, but rather in her emoting mechanics. At times, the movement of her face and mouth, or more truthfully, lack thereof, sadly hinders Tatiana Maslany’s performance by no fault of her own.

Despite the return of beloved MCU characters like Wong and the Abomination, She-Hulk: Attorney at Law manages to maintain its focus on Jennifer Walters and the drastic shift in her personal and professional life. The last time we saw Abomination was in Shang-Chi, battling it out with Wong in an underground tournament in Macau. The show provides a hilarious answer to that surprise cameo, and makes a satisfying subplot out of it as well. Tim Roth returns to the franchise as Emil Blonsky for the first time since 2008’s The Incredible Hulk, however, the character is now a drastically different person and is approached from a new comedic angle. This left-turn change will undoubtedly bother some fans but works proficiently in the context of this light-hearted series.

At certain points, Jennifer Walters herself makes sure to set boundaries with the audience by looking into the camera and assuring us that this isn’t a “cameo every week” type of show. Not only is this a fantastic way to set expectations, but it also references Marvel’s growing awareness of the fanbase mayhem surrounding cameos in other Disney+ shows. A prime example being Paul Bettany’s hint at an ultimately disappointing cameo during the release of WandaVision. She-Hulk: Attorney at Law is not driven by cameos; this series is instead aided by the appearances of these characters, uplifting sub-plots and contributing towards an ideal week-to-week viewing experience. Additionally, each episode is accompanied by a self-referential mid-credits scene, continuing gags often in some very shocking ways. If there’s one thing She-Hulk: Attorney at Law excels at it’s proving that you never quite know what could be around the corner.

She-Hulk: Attorney at Law has cracked the code in making an MCU courtroom comedy that is both snappy and engaging. It’s revitalizing to take a break from action-heavy narratives and continue to explore everyday civilian life in the MCU, a necessary element that we barely started to really explore within Ms. Marvel. This show’s half-hour episode model leaves you wanting more each week as Jennifer Walters navigates the complications that come with living, working, and even dating as a superhero who still has a long way to go in this world.