Home » ‘Cars on the Road’ Review – A Wholesome Reunion
TV

‘Cars on the Road’ Review – A Wholesome Reunion 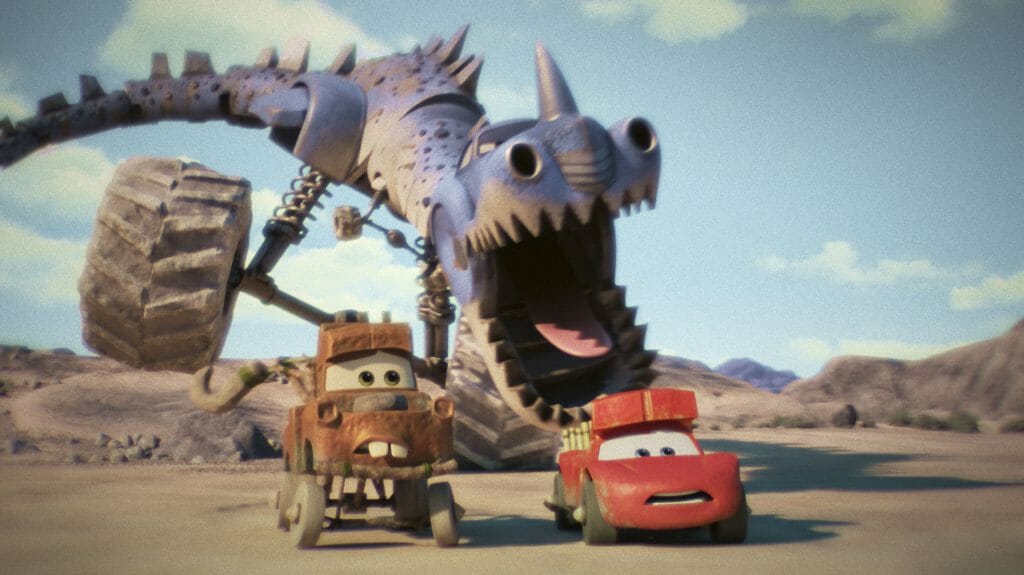 Despite its mixed critical reception, Pixar’s Cars franchise has managed to maintain its cultural relevance to this day. The latest project within this universe comes five years after the release of Cars 3, which was not the sort of finale many of us were expecting. Now after a film trilogy, Pixar is trying to reignite the vast series potential by dabbling in a new format for our four-wheeled friends on Disney+. Cars on the Road brings Lightning McQueen and Mater’s antics to today’s generation. This first season is composed of nine episodes with run times spanning between an easily digestible six to ten minutes.

Following the Dug Days series of shorts, Cars on the Road is just the second animated show to come directly from Pixar. The Monsters Inc. Disney+ spin-off Monsters at Work technically doesn’t count since it comes from Disney Television Animation – the same studio responsible for the fan-favorite Buzz Lightyear of Star Command series. But just like Monsters at Work, fans are reunited with familiar faces brought to life by the same iconic voices as before. Owen Wilson and Larry the Cable Guy return to voice Lightning McQueen and Mater respectively with the same amount of heart and passion seen in the films. It’s a seamless reprisal even after 5 years that makes us feel right at home in this unique world.

The inseparable duo embark on a cross-country road trip with the final destination being the wedding of Mater’s older sister. Cars on the Road presents a simple linear narrative with each episode progressing the characters one step (or mile) closer to this must-attend ceremony. But at the same time, each bite-sized chapter can be enjoyed as an individual short almost, with Lightning McQueen and Mater having to face vibrant and surprising obstacles every time. This Pixar series certainly doesn’t lack in its pure imagination.

Cars on the Road starts off strong with the first pit stop on McQueen and Mater’s journey being a dinosaur park. The series wastes no time in flexing its creative muscles, showing off these fun dinosaur-car fusions. Although, Cars on the Road shines the most when it features witty references to classic films we all know and love. This season features an episode that can only be described as a Haunted Mansion and The Shining crossover as well as another which is themed after Mad Max: Fury Road. Seeing these beloved stories adapted to fit within the world of Cars is truly entertaining and adds a fresh layer of gratifying intertextuality for older audiences while younger members will be hooked by the visual style alone.

Some episodes are undoubtedly more memorable than others. Over the course of the show, new recurring characters are introduced, but they are all pretty unremarkable, leading to the question of why not focus wholeheartedly on the two main cars when the series doesn’t have that much time to spare with its short time to begin with. People miss and want to see more of Lightning McQueen and Mater above all else. Additionally, there are a number of musical sequences – some of which work and some that feel shoehorned in – yet none of them maintain the memorability or catchiness that Disney songs typically manage to nail with ease.

After being so used to seeing this franchise only operate in film, it was easy to initially have reservations about Cars on the Road. However, for the story that the creatives are looking to tell here, this short format makes perfect sense and results in one of those shows that audiences can have fun both by binging if they would prefer, or watching piece by piece in snappy segments. At this point when it comes to Pixar, discussions rarely need to be had about the quality of animation, and Cars on the Road is no different. The images on display are as crisp and colorful as ever, remaining stylistically faithful to the previous Cars entries.

All in all, this is a promising first season of what has the potential to continue on for many more wacky expeditions. For those fans who are slightly older, it does offer plenty of things to adore. Lightning McQueen and Mater are exactly how we remember them, and to see them once again (in a much more entertaining narrative than Cars 3) really is quite joyful. Still, it’s of course important to consider the intent and target audience and with that being said, Cars on the Road does a swell job of flaunting this world and its endearing characters to young children who maybe haven’t been able to sit through the films yet or even experience most of Pixar. This could serve as an easy-to-watch and hilarious introduction for your siblings.

Cars on the Road premieres on Disney+ September 8!