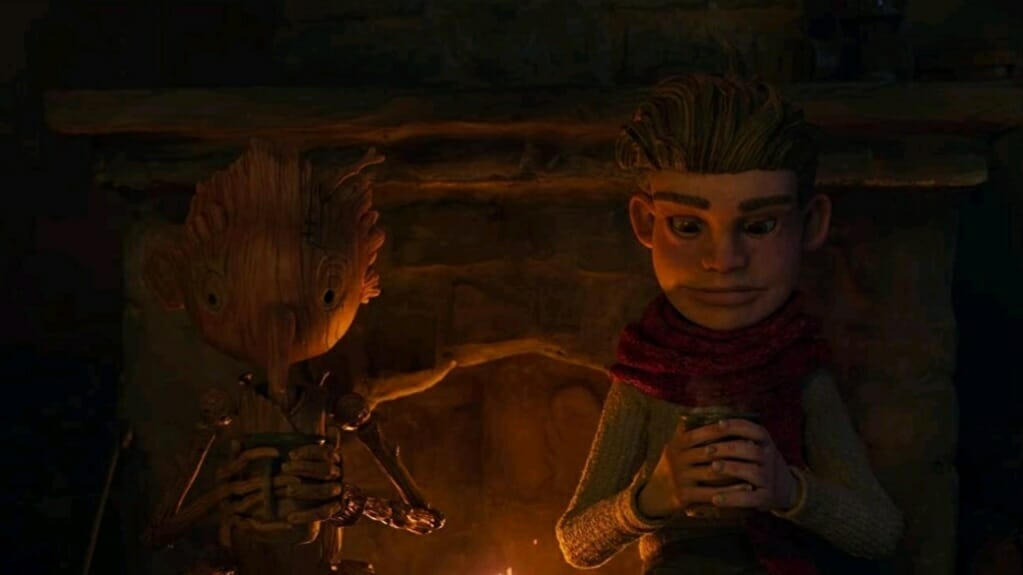 Guillermo del Toro’s Pinocchio is a modern animated classic brought to life through the stunning art of stop-motion, but plenty of credit must also go to the talented voices behind the timeless characters. With the help of co-writer Patrick McHale and co-director and stop-motion legend Mark Gustafson, Del Toro brings Pinocchio from Carlo Collodi’s age-old children’s novel to life in the dark days of fascist Italy, where he’s faced with a world that demands he steps in line despite what his heart tells him. This one-of-a-kind adaptation depicts the little wooden boy’s tendency towards disobedience as a virtue that helps change everyone around him, and redefines what it means to be “real” and alive in the first place.

Newcomer Gregory Mann proved to be the perfect decision to voice the immortal puppet, imbuing the character with just the right amount of curious and rambunctious youthful energy. With an impressive singing voice to boot, Mann’s version of Pinocchio is one that will surely define a generation. Starring alongside him is none other than Finn Wolfhard, one of the biggest upcoming stars thanks to leading performances in recent cultural phenomenons like Stranger Things and It. Wolfhard plays Candlewick in the film, a former bully to Pinocchio before the two grow close when they’re both forced into a militaristic reeducation camp by his father the Podestà (Ron Perlman), a fascist government official who aims to shape the boys into Benito Mussolini’s next loyal soldiers.

Gregory Mann and Finn Wolfhard are joined by a phenomenal voice cast in Guillermo del Toro’s Pinocchio, including David Bradley as Geppetto, Ewan Mcgregor as Sebastian J. Cricket, Christoph Waltz as the villainous Count Volpe, Cate Blanchett as Spazzatura the circus monkey, and Tilda Swinton as both the magical Wood Sprite and Death. The two young stars hold their own next to such a stacked lineup, and even power one of the most precious moments of the entire film when Candlewick and Pinocchio share a heart-to-heart moment describing their desires to be the perfect sons to their fathers while stuck at the all-boys reeducation camp. It’s one of the many crucial moments that sets Guillermo del Toro’s Pinocchio apart from any other adaptation and roots it closer to Carlo Collodi’s original source material.

Following our exclusive interview with Guillermo del Toro himself, we chatted with both Gregory Mann and Finn Wolfhard about their time working together on the Netflix film. The two revealed that, in a rarity for animated projects, they actually recorded their lines together for the aforementioned pivotal scene. In addition to their experience helping make Guillermo del Toro’s Pinocchio, we also talked about their favorite animated films and voice performances.

What did either of you know about the story of Pinocchio beforehand? Were you familiar with it as a kid growing up?

Finn Wolfhard: Yeah, absolutely. I was a big fan of the Disney film growing up. So I was familiar with it.

When you guys joined the film, what kind of discussions were had with Guillermo del Toro about what was going to really be different with the story?

Finn Wolfhard: The conversations were mostly just on the day of, when Gregory and I had that scene [in the camp] where we recorded in the booth together. I think Guillermo kind of explained it as a very, kind of, tender heart-to-heart moment. And that the movie shouldn’t feel like it’s an “animated” movie. Animation is film and life. So what Guillermo and Mark [Gustafson] did was make a movie that is about human connection, and it doesn’t matter what medium that comes from. They’re telling a story and it just happens to be stop-motion. But it’s, you know, a film.

What were some of the first animated films that really grabbed you? When was the first realization you had that where you went “that’s a good movie, that’s a great story”?

Finn Wolfhard: With the early Pixar movies, you know, Finding Nemo, Toy Story. The Incredibles is, like, one of the greatest movies. I think that’s also in my top five. I don’t even think about that movie as animated. I just think of it as it just is what it is. Gregory was saying before, Wallace and Gromit and Flushed Away. The Laika movies, like Coraline. ParaNorman is my favorite, I think.

Gregory Mann: I think that the best animated films are the ones where you forget that you’re watching an animation.

Gregory Mann: And I think that Pinocchio portrays that as well. Halfway through the movie, you’re forgetting that it’s wooden, that it’s basically a cut out of a pine tree, and a couple of puppets and this Count Volpe, this man with some massive haircut that’s just not very normal at all. But you forget that completely and just look at it like humans, almost.

Do you recall the first time watching an animated film that you heard a voice performance and were like, “wow, there’s a great piece of acting”?

Wolfhard: I mean, same kind of answer. Toy Story was just gigantic. I think just all the performances in that are insane. Tom Hanks and Tim Allen’s performances are so good. Brad Bird – I mean honestly The Incredibles is just a wall-to-wall perfect movie to me.

Gregory Mann: I’ve been watching a TV show, which is an animation. Bojack Horseman?

Gregory Mann: The producers of Pinocchio are actually the producers of Bojack. So that makes it a bit nicer to watch that I actually know the producers of it. But, I think that’s another one where you forget that it’s actually about a talking horse. And you look at Bojack like he’s a human and that’s what I love. I think some of the acting in that and the voice performances are just incredible.

Finn, you’ve now worked with Guillermo del Toro. You’ve done giant, culture-shifting movies like It. Now we’re coming up on the eve of what looks like the final season of Stranger Things. What does this end of this huge chapter of your career feel like?

Finn Wolfhard: I try not to think about it so that I don’t go insane. I think it’s sad but it’s necessary. It almost feels like some graduation. I think just for me, the most important thing is the story should end where it’s appropriate. And I think the Duffers have a good idea for the end and I still don’t know it, but yeah, I’m excited. I’m nervous, and I’m all the things. I’m all the emotions!

Guillermo del Toro’s Pinocchio is streaming only on Netflix!