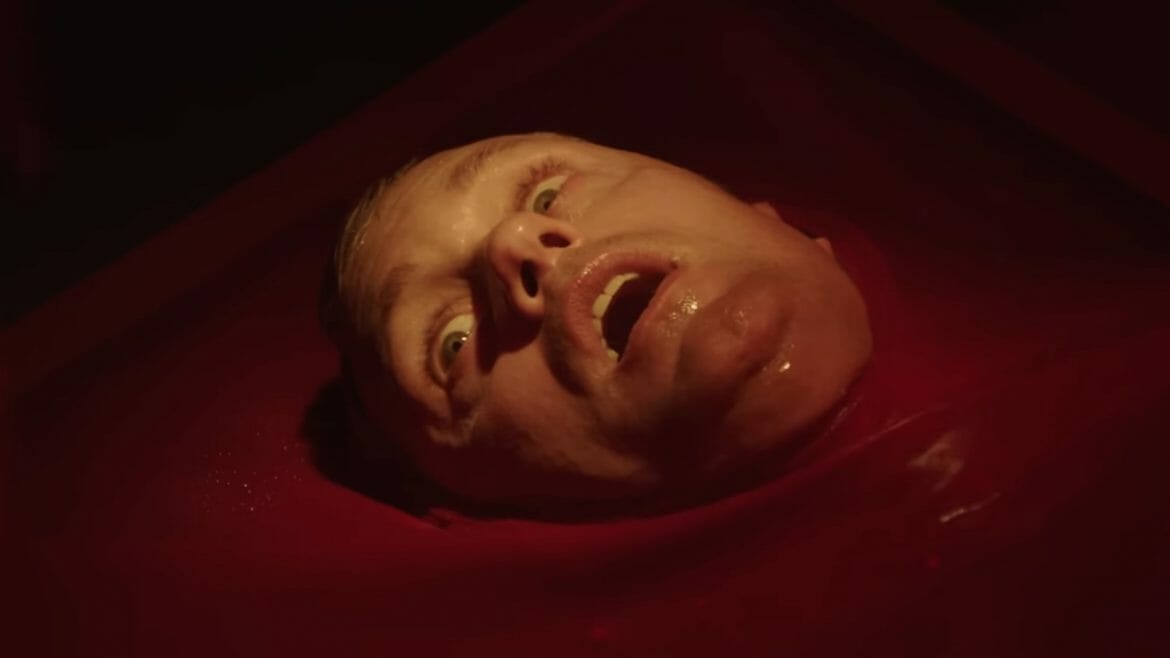 Much like his father David, Brandon Cronenberg is nothing if not an acquired taste. Despite his prior works Antiviral and Possessor garnering admirable critical notices, audiences remain fairly polarized on his work. The violent, psychologically probing films that came before are designed to alienate due to their graphically idiosyncratic nature. But when the trailer for his third feature Infinity Pool was released, something strange happened. The general public got excited purely off the involvement of Mia Goth and Alexander Skarsgård, who are hot off the heels of Pearl and The Northman, respectively. and a feeling began to arise that this could be Brandon Cronenberg’s big public breakthrough. Although Infinity Pool contains a much more easy-to-grasp plot, leave those expectations at the door. Underneath the surface, Infinity Pool is even more abrasive, mind-bending, and experimental than Brandon Cronenberg’s previous films. And what a pleasure that is.

Writer James Foster (Alexander Skarsgård) is in a deep rut. He and his wife Em (Cleopatra Coleman) go on an isolated island resort vacation in the fictional country of Li Tolqa, where they meet the mysterious Gabi (Mia Goth), a self-proclaimed massive fan of Foster’s last novel. Gabi and her husband Alban (Jalil Lespert) invite them to go off the resort grounds for a quiet beach trip. Things turn sinister when James runs over a pedestrian on his way back in a tragic accident. Facing a brutal punitive system, island detective Thresh (Thomas Kretschmann) gives James two options: accept his execution or agree to have himself cloned and be forced to watch that execution but then be set free. Once he chooses the latter, Gabi introduces him to a group of people who use this “get out of jail free” card to indulge in their sickest desires without consequence.

Infinity Pool can almost be described as vibe-based cinema, and these vibes are wonderfully putrid. Brandon Cronenberg wisely centers most of the film on the depravity of the group Gabi leads. Instead of dwelling on the horror outright, he invites you to feel the slow coming on of the thrill James gets from his experience, even early on. The cloning sequence, wherein James is dipped into a fluid that sends him into a psychedelic flash of vibrant neon colors and shifting, hard-to-parse imagery draws a straight line between unspeakable pain and unspeakable pleasure. When he watches his only double get murdered, the slightest smile cracks on his face. Alexander Skarsgård expertly conveys James’ slow addiction to a drug greater than any other, unlocking total yet debauched freedom.

James’ guide into this world, Gabi, is the proverbial devil on his shoulder, with no angel in sight. Mia Goth gives one of her very best and most wild performances yet, leaning into a demented eccentricity and lust for all the darker aspects of life. Seeing a group of grown adults commit crimes as serious as murder like they’re drunk teenagers raising innocent hell is so absurd that it inspires laughter, until the grim horror takes over. While gore certainly has its place in the world of Infinity Pool, the real terror comes from reckless abandon; those with near-unlimited resources being set free with a way to avoid any kind of responsibility.

The social commentary is strong in Infinity Pool, if simple. The rich, when given the opportunity, will act out their worst impulses – especially on vacation where they can wreck foreign lands. After all, they don’t belong to them. They get the chance to be public bullies, different versions of themselves, because they have the financial wherewithal to retreat to their own little playgrounds. Impeccable costume design makes Gabi’s group of well-off rogues look like demons in sickening masks. Moreover, the very idea of killing off a clone of yourself asks the question “how do you know for sure that you aren’t actually the clone?” It’s an apt metaphor for what you lose of yourself whenever you let go of your morality. It doesn’t take contrivance to make Cronenberg’s script exquisite in its approach to a takedown of the rich.

What’s even more mixed in Infinity Pool is the utilization of graphic sexual content. Now, what was screened at the 2023 Sundance Film Festival is the uncut NC-17 version of the film. It’s unclear as of late what will be left out for an R-rated theatrical release. Nonetheless, it must be noted that Infinity Pool features extended sequences of full frontal nudity, what appears to be penetration, and all sorts of bodily fluids being exchanged – the works. It makes its point, of course, and any movie about hedonism must contain sex. Still, It’s more that the choice to put the focus on things like a prolonged orgy sequence – which, to be fair, is beautifully shot by cinematographer Karim Hussain (Orphan: First Kill) – is pretty bizarre. To put it bluntly, Infinity Pool literally becomes pornographic rather than showing that the characters themselves are pornographic.

This is the only part of Brandon Cronenberg’s film that feels truly there for shock value. Infinity Pool finds its stride and deepest insights when James starts to fall out of love with this lifestyle, realizing he has no say in the matter. Skarsgård conveys the sense of panic, the overwhelming regret of being associated with these people. The strongest image of the movie involves James walking dejected, injured, down the street with Gabi riding on the hood of the car, drinking a whole bottle of wine and throwing fried chicken at him. The specter of debauchery follows whoever its servants choose as a target. And how Cronenberg chooses to conclude this story is as chilling as it gets.

Infinity Pool will absolutely turn several audiences off. That’s on purpose. When you hold a mirror up to those abusing their power or show the public that abuse of power, you’re going to encounter resistance. For those willing to indulge in Brandon Cronenberg’s own indulgences as a filmmaker in the name of exposing the glee that goes with evil, they’ll find one of the most original genre projects in years. Coming firmly out of the shadow of his father David Cronenberg, Brandon proves that here’s here to stay, and he’s doing it his way.