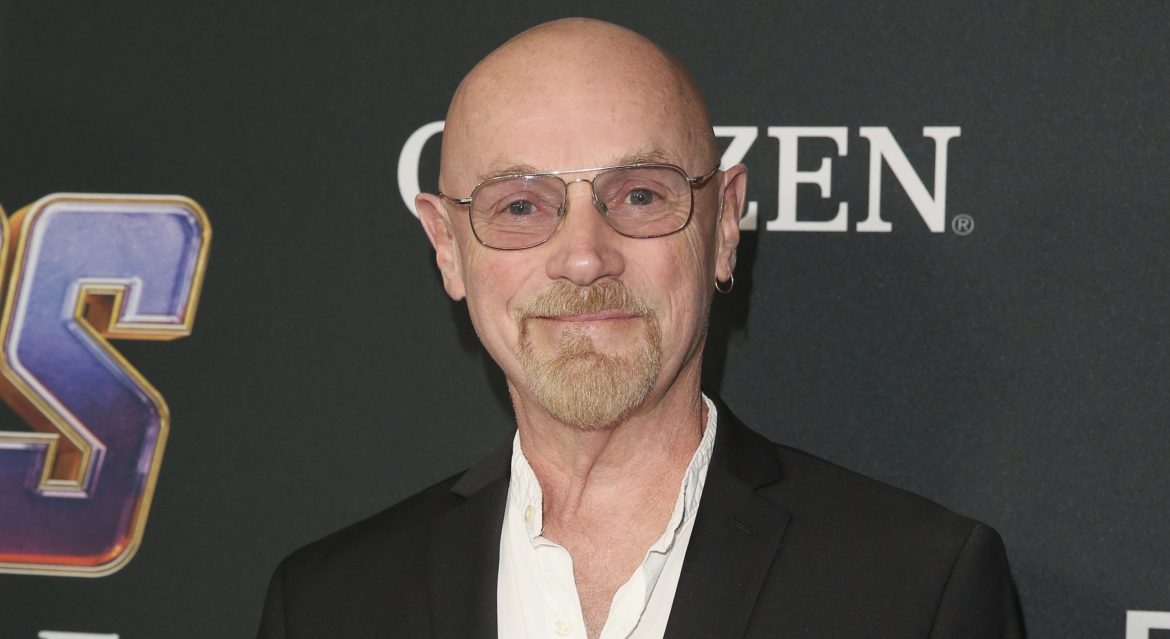 Ari and Mitch had the chance to sit down and talk with iconic comic book creator Jim Starlin. He is the creator of iconic comic book characters such as Thanos, Drax, Gamora, Shang-Chi as well multiple iconic storylines such as ‘Batman: Death in the Family’ and ‘The Infinity Gaunlet’. Read below as they discuss the impact Thanos has had in pop culture, as well as his thoughts on the upcoming Shang Chi and Eternals films.

Ari: Well, to begin, could you go over how you first started working in the comics industry?

Starlin: Sure, I’d just gotten out of the service, did a little time at a community college, put together a portfolio, went to New York and got lucky enough to show up just at the time that a lot of the older cartoonists were retiring and the comic book business was expanding. I think Marvel was going from something like 8 books a month to something like 21 or 22. So, basically they were hiring anybody who could come across state line and hold a pencil, and I just barely qualified. And that’s how I began my career in cartooning.

Mitch: Well, for the next question, you’ve created some of the most iconic characters to really grace comics, and especially at this point with Infinity War and Endgame to have just come out, with some DC works as well, how do you actually feel about the incarnations in these films based off your work?

Starlin: It’s mixed with each one and each different character, Gamora stayed very true to the character, Gunn and Bautista have created in Drax something wholly new from many things that were in the comics, he sort of looks like the more modern day version, but he’s more like my version of Drax from the Infinity Watch. Basically, Thanos is a strange mix of mine and theirs, and I just find him delightful, even more so in this latest movie, he’s a force to be reckoned with and he’s gone from being this very cute little cult character from back in the 70s to this pop culture icon, all I can say is that my first-born has done well [laughs].

Ari: And on Thanos’s culture mark he’s made now, how does it feel seeing him go from the end of the first Avengers movie where he was just teased, to now being this huge headliner of two movies?

Starlin: Well, I only found out that he was going to be in The Avengers about two days before the movie came out, so I went to a midnight showing, and behind me was sitting a comic book fan and a cartoon fan, and, you know, they were these types of characters who spoke a lot during the movie, but it was that kind of film, but when Thanos finally shows up in the final credits, the comic book fan gasped, ‘Thanos!’ and the cartoon fan went ‘who’s Thanos?’

Mitch: You know, I could remember that, I saw Avengers and that was pretty much my exact reaction to that scene.

Starlin: Yeah, so it’s basically been a surreal ride and here I’m enjoying my 15 minutes of Andy Warhol fame, and I’m going to ride it for what it’s worth.

Mitch: Well, it’s absolutely deserved, Thanos is one of my favourite characters.

Starlin: You know, I recently came from a psychology in Junior College, and there was a guy talking about Freudian concepts, with Thanos and Eros, as lighter and darker sides of human nature, and I had more fun with the darker side.

Mitch: Speaking of Thanos, what’re your feelings of Brolin’s performance? Do you feel he’s been true to the character?

Starlin: Well, when they first started talking about getting a name actor to play Thanos, Josh Brolin wasn’t on my radar at all, but now that I’ve seen him as the character, I have a hard time imagining anybody else playing him. He captured the movement and the cadence of the language, everything so marvelously that he had such a weight to the character, I haven’t got a complaint in the world about him, he’s terrific as far as his portrayal of the guy, even more so in the new movie.

Mitch: You mentioned he wasn’t your first choice, who did you have in mind?

Starlin: Well, I thought it would be more of a CG/animated figure, and it would just be a voice-over part, so I sort of envisioned someone like Arnold Schwarzenegger or Idris Elba playing him, someone with a naturally gravelly voice, and Brolin sort of went in that direction with a different cadence that the other folks would’ve brought to it, and I just think he turned it into this sex symbol kind of nightmare.

Mitch: Well, there has been some ugly sexual things with Thanos on the net these days.

Starlin: Yes, I’ve been informed of those just recently, [laughs] something about ‘Thicc Thanos’ I’m supposed to look up here once I get the chance.

Ari: And going into Endgame, what’re your thoughts now that you’ve sort of seen the full arc that Thanos’s character has gone through, as well as other creations that might be in the movie?

Starlin: Well, it’s the culmination, it’s the climax of 20-something movies and years of movie making, you know, there’s 3 hours and it just goes very fast, I was worried about a bathroom break and didn’t have to because I was mesmerized, it’s spectacular looking and it’s an emotional roller-coaster, I think everybody is going to be surprised with what they do with this, I know I was, and I was informed with a lot of the plot ahead of time, there was still a lot of things I didn’t know about, so I think everybody will be surprised.

Ari: So, moving on to your other creations, Shang Chi has been said to be receiving a film from Marvel, and he’s a favourite of mine, so what are your thoughts on that character being brought to live action, and maybe anything you’d like to see kept with the adaptation?

Starlin: More of a case of what I’d like to see left out, Fu Manchu. Not a fan of Fu Manchu, he was sort of grafted onto our creation at the last minute, without me knowing too much about him, I don’t imagine they will go that route with him. I think going with the basic character, finding some other menace that he’s trying to get away from will work quite well. I only found out about it this morning, I hadn’t seen Kevin Feige’s announcement about this, I’ve been busy with other things, so I’ll be really curious to see what they do with it, over the past 10 years, there’s been at least 2 or 3 different companies that have bought up the rights and said they were going to make the movie, never did, so I sort of came to the conclusion that Shang Chi was what people were going to talk about, never do, but now that it’s actually Marvel doing it, it’s probably going to happen, so I’d have to give it some thought, I haven’t really digested that one yet. But it’s at least 2 more premiers I get to go to [laughs].

Ari: And just a bit of a follow-up on that, if you’ve been following Shang Chi comics, like he appeared in the recent Avengers by Jonathan Hickman, are there any thoughts you might have on how the character has evolved over time?

Starlin:  Actually, I haven’t been following that, I’ve worked sporadically for Marvel, and Marvel stopped sending out bundles, and I’m 25 miles from the nearest comic book shop, so I don’t really follow comic books too much anymore, if someone comes along and recommends something, I’ll pick it up, but I have no idea. I also tend to avoid looking and seeing what other people do with my characters after I’ve left it.

Mitch: And you’ve obviously had a part in some shape or form with Eternals, with some of the characters like Kronos, Thanos and Eros, what’s that general feeling of them appearing at some point in the movies?

Starlin: I think Kronos is supposed to be in The Eternals, when they make that one, I’ve heard, it’s third hand, so take that with a grain of salt. Eros, I’d like to see, I mean, they will be bringing back Thanos, which I can’t imagine they’re not going to do down the line, after they’ve made so much money off of him at this point. The one I’d really like to see added to the Marvel Universe is Pip the Troll, I think he would be fun, and I think there’s a possibility of that now that James Gunn’s back with the Guardians movies, we’ll see, I think they have some sort of plans for Warlock, I’m not certain on this, this is speculation on my part that they do more with him, they were talking about bringing him in as a villain at first, they said, so that makes me think that he may have more life than that and that if gets that, I’m hoping that Pip the Troll will come along, you know, Thanos, Pip, and Dreadstar are my favourite characters.

Mitch: So, how do you feel about how well Endgame wraps up everything?

Starlin: Well, basically, it’s not just wrapping up Thanos’ story, it’s wrapping up these 21 movies, and a lot of the characters come to a resolution in this story, some of them heartbreaking, some of them very touching, one in particular. I’ll tell you, Chris Hemsworth steals the show in terms of comedy, you won’t believe him, and the new movie makes some changes on some of the characters that you didn’t see coming, and it’s an epic movie with these really roller-coaster emotional stuff in it that makes it probably a better movie than the first one, and that’s really hard for me to say because Thanos is throughout the first one, and not as much in this one, so, they really did a good job because I was mesmerized by just my character’s presence in the last one.

Ari: So, in Infinity War, Thanos’s father, A’lars, he’s mentioned in one line, so it seems he’s not something that they want to focus on, how did it feel when you were watching Infinity War for the first time, were you okay with that focus being shifted?

Starlin: I had no trouble with that, you know, I come into these things, I worked with film people before on scripts on other properties, so, you know, I realize that only an idiot figures that a billion-dollar adaptation of their works is going to be exactly as they put it down on the page. You gotta come into these things with a lot of flexibility, and see that they won’t stay with the exact rendition, but as long as they stay with the spirit of it, and they definitely stayed with the spirit of Thanos in the movies, very quite closely to what he had done in the books as far as actions and motivations also in a certain way. Even his motivation to eliminate half the universe was changed from what we had in The Infinity Gauntlet, but was something they borrowed from Silver Surfer #34, which was a story that Thanos told Silver Surfer to hide his real intentions to what he was up to, so it’s a rearrangement of things, but it’s all in the same pool, so I just really enjoy it, I have a great time watching these things.