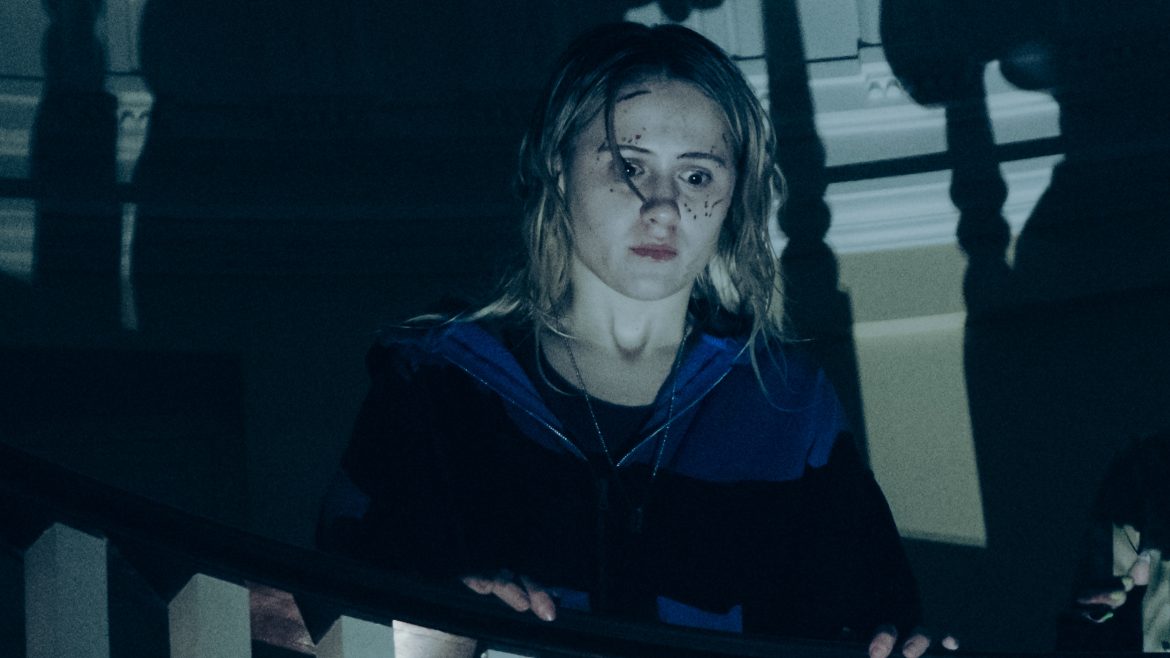 Maria Bakalova took the world by storm in 2020 with her memorable breakout in Borat Subsequent Moviefilm. Bakalova would continue her rise to stardom with a Supporting Actress Oscar nomination for the role, and in fact, she made Academy Award history as the first Bulgarian Actress to ever be nominated. Now, after starring in Judd Apatow’s Netflix comedy The Bubble earlier this year, Maria Bakalova’s Hollywood journey continues with beloved indie distributor A24. The Gen Z slasher flick Bodies Bodies Bodies has already stirred up plenty of conversations with its self-deprecating levels of humor. This was always expected, but what wasn’t is Maria Bakalova’s coming out on top of a stacked cast as the possible MVP of the film.

Bodies Bodies Bodies follows a group of 20-somethings as they party their way through a hurricane in an all-but-empty mansion. Maria Bakalova plays Bee, the sore thumb of the group only attending as the new girlfriend and plus one of Sophie (Amandla Stenberg), who also may or may not be an uninvited guest due to past grievances. When the rest of the colorful cast rounded out by Rachel Sennott, Lee Pace, Chase Sui Wonders, Myha’la Herrold, and Pete Davidson decides to partake in a not-so-friendly game of Bodies Bodies Bodies, in which a secret killer is meant to tag everyone out, real bloodshed ensues as someone in the mansion is not who they seem to be.

Directed by Halina Reijn, Bodies Bodies Bodies is a classic whodunnit with a modern twist that “teeters the line of gaslight, gatekeep, girlboss.” Its self-deprecating callouts to modern Gen Z culture hold a mirror to its target audience with the goal to bring new conversations to the table, and using horror is always the best way to do so. Bee is perhaps Maria Bakalova’s most intriguing role so far, bringing her into A24’s booming brand of horror with whole new levels of range to play with. In a change of pace, Bakalova’s powerhouse performance anchors the film down with much-needed levels of sanity. We got to hear what it was like taking on such an exciting challenge from Bakalova herself in an exclusive interview.

Those who have seen the film know that there is much more to Bee than meets the eye, and the actress tells us that these are the kinds of roles she wants to keep pursuing. On that same note, Maria Bakalova was able to give us a tease of her next exciting role, joining the MCU as Cosmo the Spacedog in Guardians of the Galaxy Vol 3. The star was revealed to be cast in the role at this year’s Marvel SDCC presentation, and it marks her first mo-cap performance as well. Read on as we dive into all things horror and beyond with Maria Bakalova!

Bodies Bodies Bodies is your first horror movie. What was it like stepping into this genre? Are you a fan of horror or did you have any qualms about it?

Maria Bakalova: I’ve always been scared of horror movies because I tend to get scared of so many things easily. I tried to prepare and challenge myself by watching films like It Follows, Midsommar, Hereditary, and Scream. Well, Scream is not that scary because it has some humor. In the past, I’ve watched some of those A24 horror movies which are visually beautiful and brilliant but then was scared for weeks after. So I haven’t been a fan of the horror genre, but I deeply appreciate it. Even more now [with Bodies Bodies Bodies] because, you know, the actors in these movies have been through a lot with blood and other kinds of liquids being thrown all over them.

The good part is that I feel less scared to watch horror now because I’m like, “Oh, I know how this was made and what’s happening.” So now I can open my eyes while watching them. Also, I was scared while we were shooting [Bodies Bodies Bodies]. Even at some points, the house we were shooting in started feeling a bit spooky, especially after being there for a month. It was a huge mansion in the middle of nowhere in Chappaqua, and there were so many levels that even the dimensions of the house started feeling like something else was going on that you couldn’t see.

I can’t imagine having to shoot in that creepy mansion. Your character Bee is the outsider of the group, what drew you to that aspect of the character?

Maria Bakalova: As an actress, I wanted to do something that is very different from myself and the characters I’ve played before. In the past, I’ve played extreme characters that have been very loud about things. With Bee, she is so private, mysterious, and so cautious about the way she speaks. It was interesting for me to think of somebody like her, and how would she survive in a situation like this.

It’s also hard for her to try to fit in with the group of friends that have been together for years and years. In that situation, I asked myself how I would have tried to fit in, or maybe, I wouldn’t have tried to become somebody I’m not. For me, Bee was a challenge and an interesting person to portray. It was also a lesson in that you don’t always have to speak so much, and that people who are seen as the weakest can actually be the strongest ones.

Absolutely, watching Bee open up throughout the film was such a nice surprise so props to you. She‘s quiet at first, but then later on she’s actually pretty badass.

Maria Bakalova: Yeah, she does take some actions instead of just using fighting words. She’s got to be the one to do it. Let’s cut the bullshit. Let’s get to work!

What can you tell us about working with this powerhouse cast of women? Amandla Stenberg, Rachel Sennott, Chase Sui Wonders, & Myha’la Herrold are all on top of their game.

Maria Bakalova: It has been very delightful because everybody was dedicated from day one. I feel like this friend group that we’ve created will exist for a very long time, if not forever, because everybody was just so passionate about the material. It’s been just beautiful to work and collaborate with people that want to do it as great as possible.

You can definitely tell the love and dedication were there with this project. On another note, I was in attendance for your epic reveal as Cosmo in Guardians of the Galaxy Vol. 3 at San Diego Comic-Con. What was that like tackling mo-cap for Cosmo?

Maria Bakalova: Yes, I was in mo-cap. I think that’s the only thing I can share so far… it’s been amazing. I’ve been a fan of the Marvel Cinematic Universe, alongside being a fan of Dogme 95, the movement created by Lars Von Trier and Thomas Vinterberg. Yes, they are two completely different things, but equally important to me. So having the chance to join the family of Marvel and especially the Guardians of the Galaxy, which was my first love in the MCU, was a dream come true. I love seeing all the people excited for Vol. 3, the fans have been so welcoming and warm. It’s truly precious and reminds you why you’re actually doing this kind of work, to make people feel something. I think that’s the biggest gift.

We can’t wait to see you in it. On top of that, what was it like working with James Gunn?

Maria Bakalova: I love James Gunn, I want to work with him for the rest of my life! He’s just everything. I don’t even know how to say it, he’s so talented. He’s so funny. He’s so fun. He’s such a great human being. What an example of a person that I’d want to be like. His dedication to his craft is admirable as well. It’s just phenomenal. I’ve been very lucky to meet him and to have a chance to work with him. I want to do it again and again. (laughs)

Well, I look forward to seeing you as Cosmo. The character has been teased here and there for years now.

Maria Bakalova: Yeah, we need some puppy love in it! We need something like that out there. Cosmo created a new world for me. So I hope people will root for her and enjoy it.