‘The Rings of Power’ Review – Welcome to a New Age 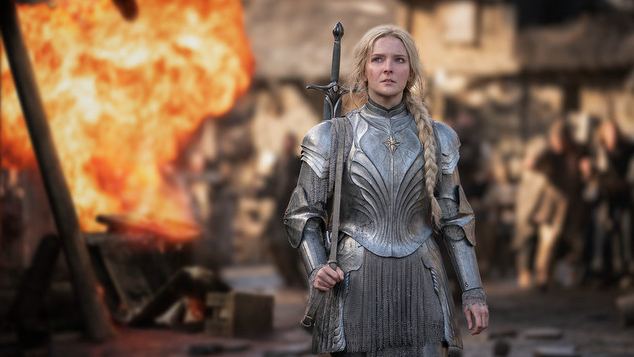 We are in the golden age of fantasy television. From The Witcher to The Wheel of Time to the recently released House of the Dragon, now more than ever fans of the genre are able to have their pick of worlds to invest their time in. With so many of these shows seeing success in the streaming era, perhaps it was inevitable that the progenitor of the genre, J.R.R. Tolkien, would once again have his classic works adapted for audiences around the world. Following a costly bidding war with Netflix in 2017, Amazon would go on to secure the television rights to The Hobbit and The Lord of the Rings novels for $250 Million from the Tolkien Estate. Now, nearly 5 years and an additional $750 million later, The Lord of the Rings: The Rings of Power is finally hitting our screens, and Prime Video is eager to carve out a piece of that sweet, sweet fantasy real estate for themselves.

Led by the screenwriting duo of self-proclaimed Tolkien enthusiasts, JD Payne & Patrick McKay, The Lord of the Rings: The Rings of Power seeks to loosely adapt the Second Age of Tolkien’s Middle Earth legendarium. Set in a prosperous age thousands of years before the One Ring came to Frodo, in The Rings of Power, the mythic world of Men, Elves, and Dwarves is at its height. These races will eventually have to band together to face the direst threat to their age: the oncoming reemergence of the dark lord Sauron, an evil that has long been assumed to be defeated, and no longer a threat to Middle Earth.

Something that can not be impressed upon enough is how breathtaking The Rings of Power is. Of course, this should be a given considering that each episode comes with a $58 million price tag, however, there are some scenes in the show that exceed all expectations. The prologue to The Rings of Power in particular, while brief, is a visual feast and is surprisingly emotional when paired with Bear McCreary’s moving score. There are also many magnificent establishing shots that often call to mind Peter Jackson’s iconic Lord of the Rings trilogy, and how those films frame our heroes traveling over great distances and perilous landscapes. Whether an intentional nod to those films or a stylistic choice from director J.A. Bayona (A Monster Calls, Jurassic World: Fallen Kingdom), it just feels so right for a story set in Middle Earth.

While the show’s high production quality is indisputable, some of the writing in the first two episodes may leave certain fans frustrated. From an adaptation standpoint, The Rings of Power certainly won’t win over any Tolkien purists who resist any and all deviation from the established sequence and detailing of events that books such as The Silmarillion and Unfinished Tales have laid out. Though, this was to be expected – and can be forgiven, to a certain degree – as the Tolkien Estate has no interest in putting the rights for these books up for sale. Due to only having access to the appendices of The Lord of the Rings in addition to condensing the events of the entire Second Age into a single point in time, the writing team is forced to create a new series of events and characters to carry the story’s narrative for five planned seasons. Sometimes this is very successful, other times it is decidedly… not.

The interconnecting storyline of the Harfoots and the Stranger (Daniel Weyman) is a great example of something that may be a change to the established lore but is compelling nonetheless. Nori Brandyfoot (Markella Kavenagh) anchors this part of the show’s narrative with all the charisma and charm you would expect from a Hobbit, and plays really well against Weyman’s ominous portrayal of the Stranger. Their shared arc is no doubt the one that viewers will be eager to see more of in the following weeks. The plot with Durin IV (Owain Arthur) and his wife Disa (Sophia Nomvete) in Khazad-dûm and how it plays into the political goals of Elrond (Robert Aramayo) is another instance where story threads created specifically for this series have worked out spectacularly. Not only is it a wonder to behold the fabled Dwarven kingdom in its prime, but the Dwarves themselves are a bold and passionate people, who are bound to win the hearts of audiences and become fan favorites.

There are unfortunately other storylines, like Galadriel’s (Morfydd Clark), that do not work as well, and at times, feel overly trite. Galadriel’s plot is more standard fantasy fare than any of the others, like something that we’ve already seen done before quite frequently. Whereas it is understandable that the writers wanted Galadriel to be the driving force of this first season, there must have been some other way to give that to her without it being so familiar. The Silvan Elf Arondir’s (Ismael Cruz Córdova) story with the Southlander healer Bronwyn (Nazanin Boniadi) suffers from similar trappings, given that it too retreads old ground.

In addition to falling into trope territory, there’s also not much to chew on for the characters of Arondir and Browyn in these introductory episodes. Though there is hope if the exclusive footage that was shown at San Diego Comic-Con is anything to go off of. Amazon revealed several clips and Arondir’s was immediately gripping, featuring good action and incredibly designed practical Orcs. It is such a shame that the studio withheld thrilling moments like these, as well as the entire Nùmenorean plotline, from review. Together they may have painted a clearer picture of how this season will turn out.

Despite the issues present in The Lord of the Rings: The Rings of Power, it must be said that it is a bold and vibrant return to Middle Earth. The series boasts a strong cast, great visuals, contextually appropriate dialogue, and an absolutely incredible score. These first two episodes might not have left as strong an impression as Amazon would have liked, but there are still 6 episodes left, and The Rings of Power definitely has all the necessary elements to become a great piece of fantasy television. We can only hope that it lives up to its own potential.

The Lord of the Rings: The Rings of Power debuts on Prime Video September 2!

Cgi turd. Rewritten story, shyte acting, interpolation of irrelevant and incongruous issues into the source material. The music sounds like someone keyed ‘sweeping orchestral’ into an ai programme and it defecated out generic mush, and the ‘sets’ look like the result of a similar process.

Gaudy and nonsensical. And everything else made to look similarly fake and artificially lit to accomodate the cgi. Including the actors, who already looked like a bunch of D&D larper twats as it was.

Overall it strikes the same visual key as one of Johnny Depp’s promos for his sausage-perfume. ‘Essence of wetness’, etc. Also share similar modes of storytelling.

As for the criticism from the wascally wacists – well, shoehorning human ethnic variety (which exists as it does due to the particular circumstances of geographic separation over millenia) as being identically parallelled in the mythological races of an imaginary prehistoric western europe was indeed a mysterious choice; but, to be fair, black elves are the very least of the problems with this steaming platter of shite. And, yes, the ones in the earlier Peter Jackson turd sequences did look like weird, inbred albinos. In some sort of garden centre.

And what did that to the head on the Shorty-the-Elf character ? Was he stomped on it ?