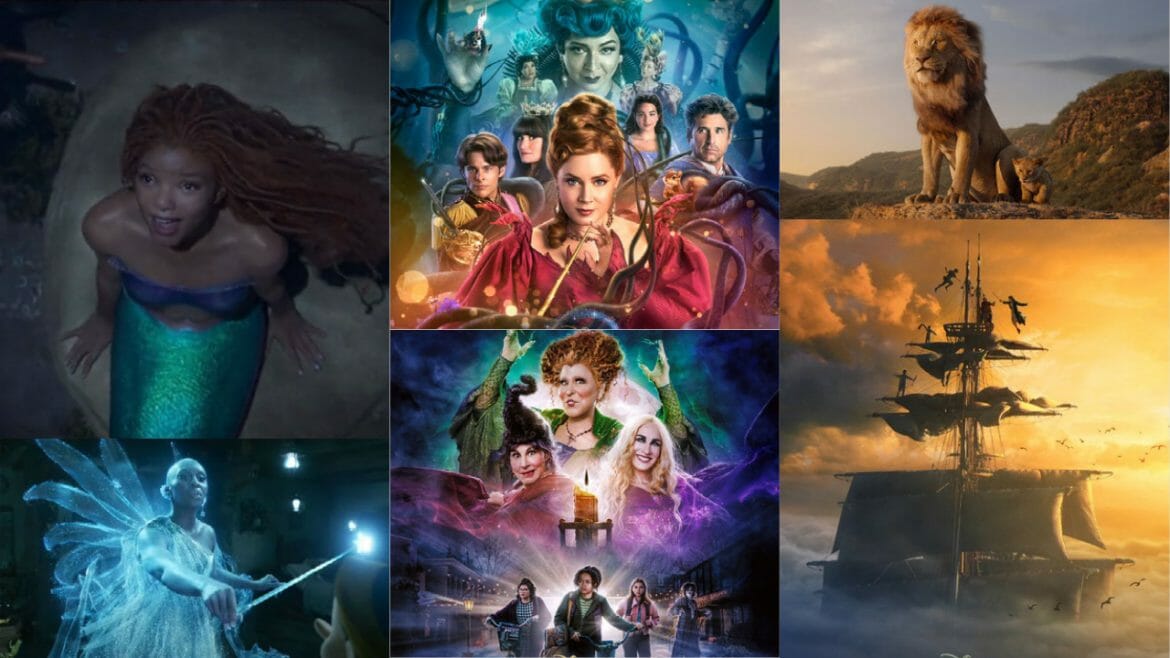 The 2022 D23 Expo is bringing a slew of new announcements and reveals, and Disney’s live-action slate is one of the main sources of excitement. Last year, Walt Disney Studios celebrated the success of hits like Cruella and Jungle Cruise, and so far 2022 has been kind to Disney+ live-action projects like Chip N’ Dale: Rescue Rangers and the freshly released Pinocchio. Looking forward, Disney aficionados can look forward to the release of The Little Mermaid, Peter Pan & Wendy, and the long-awaited Haunted Mansion reboot.

Walt Disney Studios brought plenty of goods to this year’s D23 Expo, debuting plenty of EXCLUSIVE footage only for con attendees and enough online reveals for fans at home to enjoy. Keep reading for a breezy recap of the biggest Disney live-action news along with our very own footage descriptions that can he found nowhere else. Stay tuned for more D23 Expo updates from Marvel and Lucasfilm this weekend as well!

Perhaps Disney’s most requested legacy sequel, Disenchanted finally arrives this Thanksgiving and pits Amy Adams’ vibrant Giselle against an unprecedented challenge – motherhood. Fifteen years after she and Patrick Dempsey’s Robert found their shared happily ever after, the couple struggles to balance the chaos in their family life with now a second daughter in the mix. Maya Rudolph plays a new sinister evil that threatens to tear Giselle’s family apart and is joined by her two devilish helpers in Yvette Nicole Brown and Jayma Mays. The film premieres on Disney+ on November 24, 2022!

Ever Anderson stated that, as the title suggests, the film is equally shared by both its leads as opposed to a traditional Peter Pan retelling. Fans will be diving deeper into both Wendy’s backstory and Peter’s. Alexander Molony and Jude Law said that Pan and Hook’s lengthy rivalry will be further fleshed out, specifically giving the staple Disney villain unseen perspectives and motives that will attempt to put him on the “right side” of their history. Law was quick to mention that the film boasts tactile swordplay, which made playing the character even more worthwhile. Peter Pan & Wendy arrives on Disney+ in 2023.

Exclusive footage description: The footage shown was brief but followed the traditional beats of the classic Peter Pan tale. We see the Darling siblings get swept away by Alexander Molony’s Peter Pan in old timely London. It appears that they get sucked into Neverland through a portal on the Big Ben clock tower. When exploring Neverland, the siblings encounter the Lost Boys who now feature some young female members who are quick to note that the “lost boys” title doesn’t exclude girls.

David Lowery’s version of Neverland is mystical yet still grounded. It looks like it could be a real, expansive location you could visit in our world, but with extraordinary beings running rampant. The footage eventually puts Wendy face to face with Captain Hook, who doesn’t look that different from Hugh Jackman’s version of the character from 2015 with his shiny balding head. We additionally see Hook’s pirate crew take flight with a ship that soars in the air. Peter Pan takes the fight with Hook to the skies as the montage wraps up with the boy facing the giant ship head-on by himself in the beautiful Neverland sky. It seems that David Lowrey is bringing a sense of reality and life-inspired history to Peter Pan while still keeping the magic of the story.

Dear White People director Justin Simien exclusively premiered the first footage for Disney’s long-awaited Haunted Mansion retelling to D23 Expo attendees. The filmmaker described the story as a traditional “haunted house” narrative that follows a mother and son who enlist a group of colorful, so-called paranormal “experts” to exorcise their new home of its demons and ghouls. The family comedy boasts a stacked cast that features the likes of Rosario Dawson, LaKeith Stanfield, and Owen Wilson in leading roles and Winona Ryder, Danny DeVito, Hasan Minhaj, and Dan Levy in supporting parts.

The film was teased to include a slew of Easter Eggs from the historic Disneyland attraction, almost too many to count from the EXCLUSIVE footage shown. Horror veteran Jamie Lee Curtis was additionally revealed to be starring as Madame Leota, the psychic medium who visitors see as a floating head within an orb on the Haunted Mansion ride. Justin Simien also played coy with the audience and teased that none other than Jared Leto will be playing the one and only Hatbox Ghost, who is arguably the most known spirit from the Haunted Mansion. Disney’s Haunted Mansion releases only in theaters March 10, 2023.

Exclusive footage description: We see Rosario Dawson’s motherly character and her son explore the Haunted Mansion for the first time after assumably buying it for the purpose of remodeling. They are joined by LaKeith Stanfield, who is sporting an eccentric hairstyle and is wearing a red Thriller-inspired jacket, and Owen Wilson who looks hilarious as a priest. Stanfield and Dawson seem to be the two main leads while Wilson plays a more mentor-like role as the one who knows most about exorcising spirits. We see the group discover an ancient seance room from behind a giant painting that acts as a secret door and chaos ensues as the mansion’s many spirits take that as a wake-up call.

The rest of the footage included a montage of the supporting cast, including Danny DeVito’s character who seems to be somebody who’s been studying the Haunted Mansion for years and warns the main players to not go inside. We see Stanfield and Wilson battling off spirits face to face, many of which are taken straight from the ride. The Hatbox ghost, the three Hitchhiking Ghosts, and the Black Widow Bride all make brief appearances. The film is certainly action-packed but also seemingly sticks firmly in its family comedy roots. It’s a different approach to what many might expect when they hear the “Haunted Mansion.” However, LaKetih Stanfield and Own Wilson’s characters look like they’re having too much of a good time so this risk might pay off.

The Snow White presentation was short-lived but filled with tons of promise. Stars Rachel Zegler and Gal Gadot surprised D23 Expo attendees with some fresh details and an EXCLUSIVE sneak peek at the film. Zegler shared that this new adaptation with bring the early Disney princess to the modern age and will focus much more on the character finding herself and her agency. This multi-faceted story also gave Gal Gadot the chance to go all-out in her evil and “cuckoo” performance, which is something that the global star is still getting used to as she’s always playing heroic roles. Disney’s Snow White arrives only in theaters in 2023.

Exclusive footage description: The quick montage shown revealed Gal Gadot as the Evil Queen first as she cites the iconic line, “Mirror, mirror on the wall, who’s the fairest of them all.” Zegler and Gadot’s costumes are ripped almost straight from the animated classic. Snow White is directed by Marc Webb, most known for 500 Days of Summer and the Andrew Garfield Spider-Man films, and you can definitely start to feel his touch. The film is evidently more brighter and purposefully saturated than Disney’s other live-action retellings, with Snow White’s cottage and signature dress popping off from the screen. Although little footage was seen, we did get to see Snow White take a bite of the poison apple and faint to the ground, and it was as melodramatic as it could. This interpretation seems to be going for a more campy approach, and this might work in its favor.

Oscar-winning filmmaker Barry Jenkins surprised D23 Expo attendees by debuting an EXCLUSIVE early look at his prequel, MUFASA: The Lion King. The film tells the tale of how Mufasa rose to prominence in the animal kingdom and will be split into two timeframes. Timon, Pumba, and Rafiki are actually recalling the story to a new lion cub, and the film will go back and forth from their narration and conversations in the present to Mufasa’s actual origin in the past. Billy Eichner, Seth Rogen, and John Kani all reprise their respective roles from Jon Favreau’s 2019 film. But of course, with it being Timon and Pumba, there could be a lot of sidetracking going on as the three narrators each get a chance to share their two cents in the spotlight. MUFASA: The Lion King arrives only in theaters in 2024.

Exclusive footage description: Although very brief, what was shown from MUFASA: The Lion King does already look somewhat distinct from Jon Favreau’s 2019 film. Since this is a prequel, the events set in the past following Mufasa do have a sort of hazy look to them. Colors are a bit more distinct as if it’s meant to be viewed as a memory, while the events in the present resemble the 2019 film more closely. Cub Mufasa does once again look adorable and he does indeed look distinct from Simba with darker golden fur. The short montage also teased how Timon and Pumba will have a heavy comedic role throughout as expected, interrupting Rafiki’s narration with their own side commentary. The wise Mandrill seems to be running on short patience with these two jesters.

The Little Mermaid was Disney’s largest heavy-hitter for their live-action slate. Audiences have been dying for any kind of first look at the remake led by music star Halle Bailey, and their cries were finally heard. A short teaser was shared with the public online but D23 Expo attendees got the EXCLUSIVE opportunity to see the full musical sequence of “Part of your World.” Furthermore, director Rob Marshall confirmed that the film will feature 4 new songs along the classics, with the beauty of Alan Menken’s original score still being retained. Halle Bailey is joined by Daveed Diggs as Sebastion, Jacob Tremblay as Flounder, Awkwafina as Scuttle, Javier Bardem as King Trident, and Melissa McCarthy as Ursula. The Little Mermaid releases only in theaters May 26, 2023.

Exclusive footage description: The entire “Part of your World” musical number was shown and it plays almost frame by frame as in the original animated film. The water effects can only be described as a “cleaner” version than what is utilized in the Aquaman films, the only examples that you can really compare this to in those regards. By design, the screen here is much more clear and clean than how the water looks in those films basically. Halle Bailey doesn’t disappoint whatsoever and is destined for glory. Her whole design as Ariel is closely accurate to the classic look with its colors and a large flowing tail.

Ariel’s hideout of trinkets is notably more dimly lit and darker than in the animated film, adding some life-like underwater realness to this adaptation. Likewise, Flounder looks like a real fish and doesn’t have many animated facial expressions, or at least that’s what it looks like now at this early stage. Final note, even though the film does look grounded to a degree with its underwater environments, Rob Marshall looks on track to deliver another visually expressive film in line with the likes of Marry Poppins Returns.