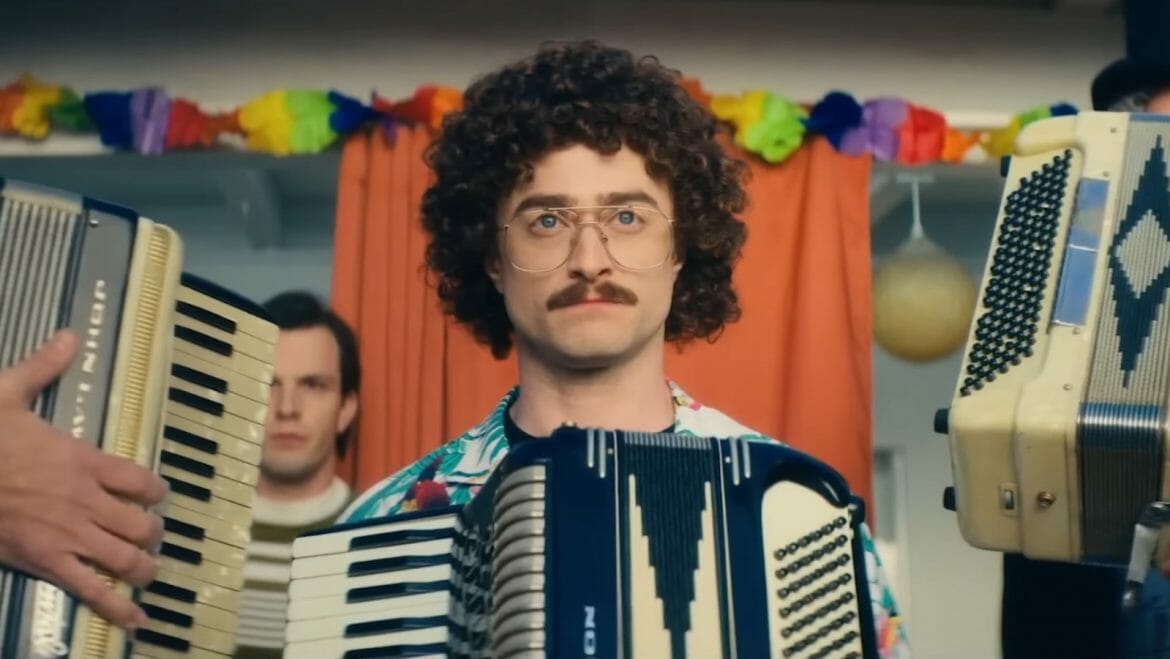 To Almost no surprise, Weird: The Al Yankovic Story is a ridiculously eclectic and rightfully hysterical tale for its central pop star. Directed by Eric Appel and starring Daniel Radcliffe as none other than the parody singer-songwriter himself, Weird Al Yankovic, the film acts as both a celebration and thoughtful reflection on his career. This wildly rowdy biopic strays away from the generic Hollywood formula and exaggerates the truth, sometimes full-out rewriting history altogether, but any other way just wouldn’t be befitting to the King of Pop Parody.

We follow young Al in his youth, living with his overbearing parents and soon discovering his love for the accordion and knack for making up comical lyrics to pre-existing songs. His parents scoff, he struggles to fit in school, the film seems to follow a pretty straightforward, simplistic narrative at first. That’s until a steamy relationship with Pop Queen Madonna – reimagined with an extremely larger-than-life personality – blossoms and drug lord Pablo Escobar steps in to interfere with their romance as well as Al’s music career. There are ridiculously fun and shocking cameos throughout the film, including ones from Weird Al himself, and everyone involved is having the time of their lives, which is truly an addictive type of energy to be felt from the opposite side of the screen.

The musical scenes are a blast as Weird: The Al Yankovic Story is extremely clever in creating joyous moments of storytelling, dropping obvious hints and jokes as a way to allude to whatever song Al is about to improv next. The first songwriting process we see is a college-aged Al’s sandwich-making epiphany that leads him to create ‘My Bologna’, a parody of The Knack’s ‘My Sharona.’ His roommates-turned-band members support his imaginative ideas, running to a nearby bus station bathroom and using the acoustics to help Al record one of his first iconic hits. Later, they are pictured shredding instruments on stage with Al, sharing in the limelight and embracing their natural-born rockstar skills. These sequences are wacky yet heartfelt, and even though this may or may not be how these events actually played out, it doesn’t quite matter because this is Al’s story exactly how he’s decided to tell it.

Weird: The Al Yankovic Story can almost be equally split into partially-accurate sequences and completely fabricated ones, and this unique structure is key to its success as the film almost never drags; even when it does begin to wander it gets back on track too quick to complain. The mix of white lies, tall tales, and sprinkles of truth keep this biopic consistently fresh – the audience is always surprised and the laughs just keep on coming. Weird Al himself co-wrote the script with Eric Appel, who previously made a fake Funny or Die trailer of the film, originally starring Aaron Paul as Al and Olivia Wilde as Madonna. The duo manages to use that viral skit as a clear jumping-off point and expand the premise into a full-length feature that works like a charm. Despite its parodical nature, there are very real themes present such as the struggle to succeed in making loved ones proud, rekindling past relationships, never forfeiting your dreams, and even the power of forgiveness.

Daniel Radcliffe is passionate and transformative for the entirety of the film and through his addictive screen presence, he pays a genuinely wonderful homage to Weird Al. Rainn Wilson is also a standout as Yankovic’s muse turned mentor, Dr. Demento – his favorite radio personality growing up. Wilson’s kooky character supports Al in his journey, giving him the idea to lengthen his already long name and even offering adoption papers for an adult Al to sign when his relationship with his parents gets rocky. Evan Rachel Wood is absolutely electric as a young and money-hungry Madonna, whose character arc is something to be bestowed as she takes quite the unexpected and amusing path, and sells every single second of it. Other supporting players include Quinta Brunson as Oprah Winfrey and James Preston Rogers as Hulk Hogan, the remainder of the star-studded cast is much too fun to spoil!

From vibrant cameos to historical inaccuracies to an overtly dedicated performance from Daniel Radcliffe, Weird: The Al Yankovic Story is a film that caters to his fanbase and stays true to the very artist himself. It’s exactly what one would hope for in a musical biopic of a parody legend’s life. There is some minor humor that doesn’t land as flawlessly as intended and a bit of momentum loss in the third act, but these are minor grievances compared to the big picture. Fans will be over the moon with this film and there’s a good time to be had even for those somewhat unfamiliar with this music icon. Weird: The Al Yankovic Story is amazingly unhinged with its slew of charming performances, and it boasts an ending that will be hard for future musical biopics to beat.

Weird: The Al Yankovic Story premiered at the 2022 Toronto International Film Festival. The film debuts on the Roku Channel November 4!