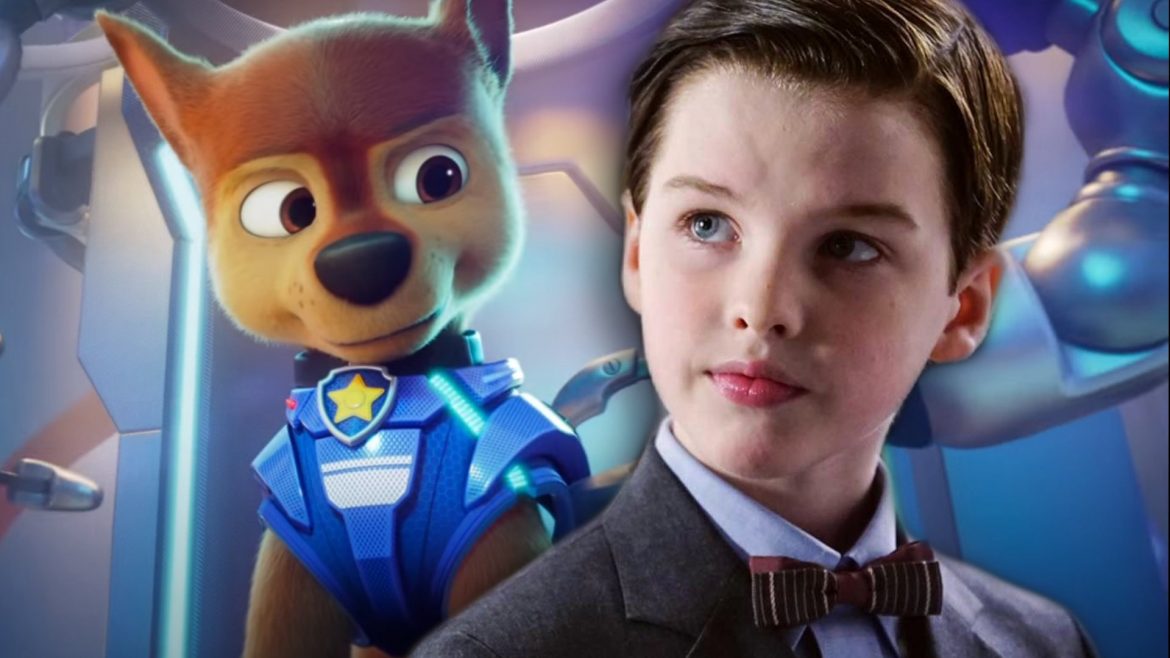 With his face plastered onto countless Young Sheldon ads, Iain Armitage is one of the most recognizable actors of his age. At only 13, he has already had quite a career. He’s had quite an interesting journey from his beginnings as a seven year old theater critic on his YouTube page, to the acting portfolio he’s amassed today. Besides being the lead on Young Sheldon, a show recently renewed for three more seasons, you can also find him on Big Little Lies as Ziggy Chapman. Armitage’s next starring role, however, is in PAW Patrol: The Movie as Chase, releasing in theaters and on Paramount+ on August 20th.

Bringing such a beloved and well-known character to the big screen can be a complicated feat, but he embodies the role with the same attitude he brings to his interview with DiscussingFilm, enthusiasm and professionalism. We were lucky enough to speak with Armitage about his upcoming project, his experience on Young Sheldon, and how he feels about resuming his part-time job as a theater critic.

So for many years, you ran a YouTube account dedicated to reviewing theatre. Broadway is reopening soon, so I was just wondering what you’re most excited about and what shows you want to see when they come back.

That’s a wonderful question. Thank you so much. It’s funny, we’re still doing the account, but the problem is, since COVID, we haven’t posted anything new. It’s like, “Oh, for the past year and a half, there’s been no new content.” But I cannot wait to see my dad in Hamilton again. I can’t wait to see all of it, especially Six, which I saw in London and it was amazing. Like, almost Hamilton level. And I mean, you know, I feel like Hamilton now is the standard for excellence.

I do like Six. I listen to that show a lot.

So since you have that background, you were a fan of acting for so long, what interested you about it? And why did you decide to go into it? What do you enjoy about it?

Why, I enjoy it all. I think it’s just a really fun career. And you know, a lot of people have jobs where they’re doing the same thing every day, and it can get a little bit monotonous and kind of boring. I am very lucky because my career is so crazy and so different. Even if I’m just doing one show, every day there’s a new challenge and a new fun thing to do. It’s always just so much fun. Yeah, I just enjoy doing it so much.

So, obviously, you have probably have the most experience like face to face acting, in person live acting. But for PAW Patrol, you had to do voice acting, which you did a little bit of experience before, but I think this was like your first big role voice acting. How is that different from acting in person? What were some difficulties or things you enjoyed more about it?

Well, I love live action a lot, and I’ve been doing it for a long time. It’s just very fun, and I feel like I know it very well. But it’s so cool, this whole new challenge of just having my voice in… I feel like when you’re acting with your whole body, it’s a little bit easier to convey what you’re trying to express. You’re flustered, you moving your body around a lot, if you’re happy, you can sort of [gestures to convey happiness], but with Paw Patrol, I had to convey all my emotion through my voice. It was a really fun challenge, and I really enjoyed it. I got to see the movie a little while ago, but I’m really looking forward to seeing it tonight on the big screen. Because I saw it a little while ago, but it was on a little iPad and it had watermarks on it. You know, it’s like “Property of Spin Master” and stuff, so it’s gonna be good to see it for real.

I’m glad that you get to see it! When you were doing the film, what was the process like? Were you able to like act with your co-stars? Or was it more challenging because you were by yourself?

With most voiceover, you’re not with anyone. You’re just in a tiny little booth with like a microphone and your script. There’s one person in the other room and a couple of people on Zoom, and the person in the other room tells you when to go and gets all of the stuff ready. You’re usually there for anywhere from two to eight hours. I’m reading through it and yeah, I love it. It’s really fun. Marsai, my co star, who’s really awesome who plays Liberty, on another interview we were talking about how it’s funny because you can just show up in sweatpants, you could show up in pajamas, and they wouldn’t care because they don’t see your body. It’s really fun, and it’s a fun challenge, too.

Do you think that’s something that you’re interested in pursuing, more voice acting roles? Or do you think you prefer like live action?

Oh, that’s hard. I like both so much. So it’s hard, it’s hard to choose. I would love to do more voice acting in the future. It’s really cool and I enjoy doing it. Live action, I think that’s what I’m the most used to. I could just slip back into it, and just be like, “Okay, let’s go.” And then with with voice acting, I’m sort of like, “Oh, okay.” So I think I’m cool with both, though.

I saw the movie this morning. I thought you did a very good job and that it came across very well, so good job with that.

Are excited for other people getting to see it, especially tonight?

Well, you know what? I feel like it’s it might, it’s either good or bad that I’m good at playing a dog. It’s either a really good sign that I’m a good actor, or just my natural tendencies.

I mean, think about it. A lot of great animated movies are about animals.

Well, on the show, I did quite a lot.

Yeah… so what excited you most about playing this dog, playing Chase?

Well, I think it’s a role that so many people know, and it’s so easily identifiable. I think he’s what a lot of people want to be like, he’s in charge. He’s really cool. He’s competent. But, which is cool about this movie, is [that] he also does have some fears, and some bad things that happened in his past. And he really faces that in this movie. I think it’s really cool to see him overcome all that and really, to sort of grow as- I was about “say to grow as a person,” but I guess not. Grow as a dog?

Yeah, grow as a puppy! But yeah, it’s such a cool character to play. Just, you know, the challenge is not only with being a dog, but also conveying all that emotion just through my voice.

Speaking of another iconic role, you play young Sheldon. How has filming been during the pandemic? And are you excited for the next season?

That’s a great question. I’ve always have fun filming it, and it’s always amazing. It is definitely been a lot harder during the pandemic, for obvious reasons. We have a lot of great safety protocols on our set, which is amazing, and they keep us very safe, but it’s hard sometimes, doing all that. It’s all masks on and they turn on all these big fans around the set- not fans, but dehumidifiers and things to take all the germs out of the air and stuff. So it’s a lot and it’s more complicated, but it’s still very fun. I love doing it. Also, we got picked up for three more seasons, and I’m still kind of not done processing that. I’ll go there in the morning, and I’ll be like, “Wait, I’m gonna be doing this for the next three years.”