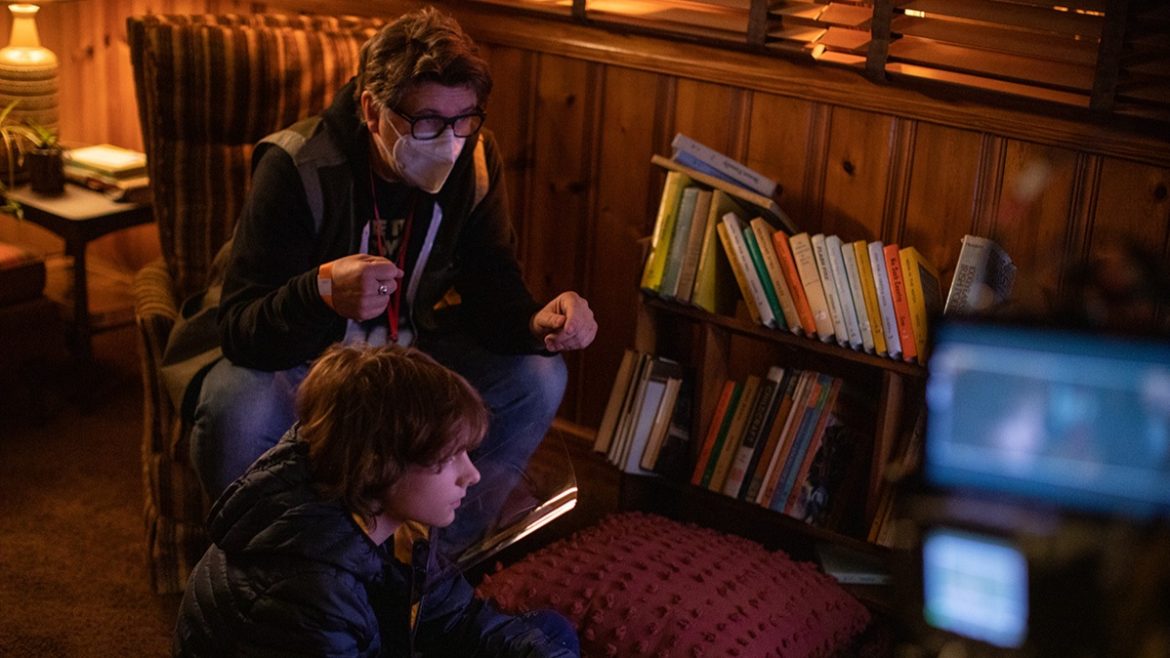 Scott Derrickson couldn’t have asked for a better comeback than The Black Phone. After departing Doctor Strange in the Multiverse of Madness due to creative differences, the director went back to his horror roots and not only produced what many agree to be his best film thus far, but the third biggest global box office hit for horror since the pandemic – landing behind The Conjuring: The Devil Made Me Do It and A Quiet Place: Part 2. The film’s total gross now goes beyond $150 million, which couldn’t be more impressive for an original story, purely generating success through word of mouth, another ace Blumhouse marketing campaign, and, of course, the weight that Scott Derrickson now carries with his name alone.

Adapted from the short story of the same name by Joe Hill, The Black Phone follows siblings Finney (Mason Thames) and Gwen (Madeleine McGraw) as their world gets torn apart by a mysterious figure in their Colorado town. The year is 1978 and the serial killer known only as “The Grabber” (Ethan Hawke) has found ways to make himself practically invisible to the public eye and pick off the local children one by one. His motives are unclear, all that is known is that once you fall into his clutches, there’s no coming back. When Finney finds himself locked away in The Grabber’s den, he’s given a final lifeline through a mysterious black phone which is able to communicate with the lost souls of previous victims. On the outside, Gwen taps into her own sixth sense as a last-ditch attempt to save her loving brother.

The Black Phone, more than anything else, is “a larger testament to the kind of humanity and imagination that can come out of modern horror.” Yes, it’s got a bone-chilling atmosphere and a new horror icon thanks to Ethan Hawke’s vibrant performance, but at the center of it all is a sibling bond that audiences rarely see portrayed so convincingly. It’s this exact element that we got to discuss with Scott Derrickson himself in an exclusive interview. The filmmaker’s horror repertoire speaks for itself, with films like The Exorcism of Emily Rose and Sinister still being talked about to this day. More notably, Sinister was once reported as the scariest movie ever according to a scientific study. In honor of The Black Phone hitting its Blu-ray release, we dive into how Scott Derrickson evolved his craft for the film and what he may do next in the horror genre. The real cherry on top, though, the director tells us what he thinks of all the calls from fans to see another movie with The Grabber and our obsession with movie monsters.

First of all, I have to congratulate you on the massive success of The Black Phone. You’ve often quoted the great Wes Craven on saying that horror is so successful because it’s like an inoculation of fear. “Horror films don’t create fear, they release it” as he would say. How would you relate this point to The Black Phone?

Scott Derrickson: I think any horror film that succeeds has that aspect to it, that release of fear. For any horror film that does really well, the first thing it has to be is scary and suspenseful, which I think [The Black Phone] is, and audiences have indicated that. But I think the emotional quality of this movie that made it kind of a runaway success and exceed everyone’s expectations, in terms of the business that it did, was the fact that you really come to care about these two kids. You really come to care about the lead actors, and where the movie goes is not a typical dark ending, or a typical sort of victory but then a promise that things are still going to be bad.

Usually, you kill the serial killer but then maybe he’s going to come back is how these movies typically end, you know? And I think the fact that the whole movie was constructed toward something positive is not common for a project like this. The first time that Ethan [Hawke] saw the movie, he texted me, “The movie is so scary and so suspenseful, and yet the entire movie is told from a point of view of love. And I don’t think I’ve ever seen that before.” I still remember that because I thought to myself, yeah, that’s what it is about this movie that is unique and I think that’s the same reason it’s been so successful.

That’s a great answer. Speaking of the two children, they truly are the MVPs of the film. In horror, specifically, child actors can either make or break the experience depending on how much is pressured onto them. So how do you guide young actors like Mason Thames and Madeleine McGraw through scenes that can be not only emotionally taxing but really violent as well?

Scott Derrickson: Well, the violent scenes are their favorite scenes to do! That’s been my experience working in horror with kids. First of all, it’s like Halloween, they love to get bloody and they love to wear makeup. I mean, Halloween is a kid’s holiday, it’s not an adult holiday. Kids love to dabble in the macabre, they love to have blood put on them, and all that stuff. So for the ghost kids [in the film], especially, they loved that.

Madeline’s favorite scene to shoot was the bully scene, you know, where she gets to fight and she gets kicked in the face, the whole thing. That was her favorite thing to do because I let her do all of her own stunts. But, you know, the key to it is in the casting. I have a good eye and a good understanding of what is real talent when it comes to acting and especially with kids. I just looked really hard for a long time to find these two kids, and even in looking as hard as I did, I still would have been fortunate to find one kid as good as Madeline and Mason – but to find both of them for the same film is kind of miraculous. As soon as I auditioned them, I knew “Oh, I’ve struck gold here. I really hit the motherload.”

One of my favorite aspects of The Black Phone is your use of film grain during those flashback and dream segments with The Grabber. It’s very reminiscent of the film reel segments in Sinister, so I’m curious if you consider this a signature element of your style and storytelling?

Scott Derrickson: Yeah, it’s Super 8 film footage is what it is. I had shot on Super 8 in film school. I was part of the last semester at USC Film School that actually did work on Super 8 film. In the first class I took there, you had to make five Super 8 short films. Also, my dad had a Super 8 camera so I had some experience already growing up and playing around with his camera. So then I made these five shorts at USC and I was really in love with this medium. And then with Sinister, it’s part of the story, he’s finding Super 8 films. During the testing process I did with the DP, Christopher Norr, I really became enamored by what Super 8 does, what the different film stocks do, the messiness of it, the mistakes that are almost inevitably there in terms of camera flare, camera jitter – there’s a dangerous excitement to it. When you blow it up on the big screen, nothing looks like Super 8.

There are all kinds of phone filters where people can try to do an imitation of it, but it doesn’t look anything like real Super 8. There’s nothing like film grain, there’s nothing like the shutter errors that you get and all of that. So when it came to portraying Gwen’s dreams, I just felt like, “Oh, this is the medium I can use again for this.” I knew that people would, of course, connect it with the Super 8 films in Sinister, but I also chose very different stocks and shot it in very different ways. There’s just a dreamy mystery to the feeling that you get when you’re watching Super 8. You know, it’s strange, I think if you went into your grandmother’s garage and found a Super 8 film and put it on a projector, I don’t care what’s on it, it would be a little creepy.

Now, I’m really interested to hear your take on this next question. The Black Phone is very deliberate in telling the audience exactly what they need to know about The Grabber and nothing more, but I’ve talked to so many people who are now asking for either a prequel or sequel to learn more about him. My response to that is usually like, “I don’t need to know more, that’s not really the point of the movie to me.” But what’s your take on this? Why do you think audiences always want to learn more about monsters in horror?

Scott Derrickson: I think that’s a great sign. They feel that way because he’s so fascinating and they want to know more. It’s the same reason why people watch true crime documentaries, because they want to know more, especially about serial killers. I’ve watched dozens of serial killer documentaries because I want to know more about the serial killers, you know, what makes these strange anomalies tick? What makes these monsters do what they do? Of course, in many cases, there is no answer. You can look at Richard Ramirez and say, “Yeah, he was abused as a child, these things happened to him, and so that’s where the violence came from.” Maybe, sure? But lots of other kids go through that same kind of abuse and don’t become sadistic homicidal maniacs. And then Jeffrey Dahmer had good parents and a normal upbringing, so what’s his backstory that we’re missing?

I think that when it comes to sociopathology and true psycho killers, part of what makes them interesting is their otherness and the fact that there is no story that could explain the mystery of what it is that they do. And I think the best villains that we’ve seen in genre filmmaking don’t try to reduce them to some backstory that explains why they are the way they are. Why is Heath Ledger’s Joker the way he is? He tells us three or four stories about how he got those scars – probably none of them are true. Maybe one of them is true? The point is, we’ll never know and that just adds to his mystery. If Hannibal Lecter had a story that said, “This is why he became a cannibal and started eating people.” Suddenly, Hannibal Lecter wouldn’t be that interesting. So when people say they want more, good, I want them to want more. You know, that’s the mystery of this kind of sadistic killer.

So now with The Black Phone behind you, do you have any new projects lined up in your head or possibly even ready to go?

Scott Derrickson: I’ll definitely be busy for the next couple of years. There was a big gap in time between Doctor Strange and The Black Phone, and this isn’t going to be like that.

The Black Phone is now available to own Blu-ray and DVD!