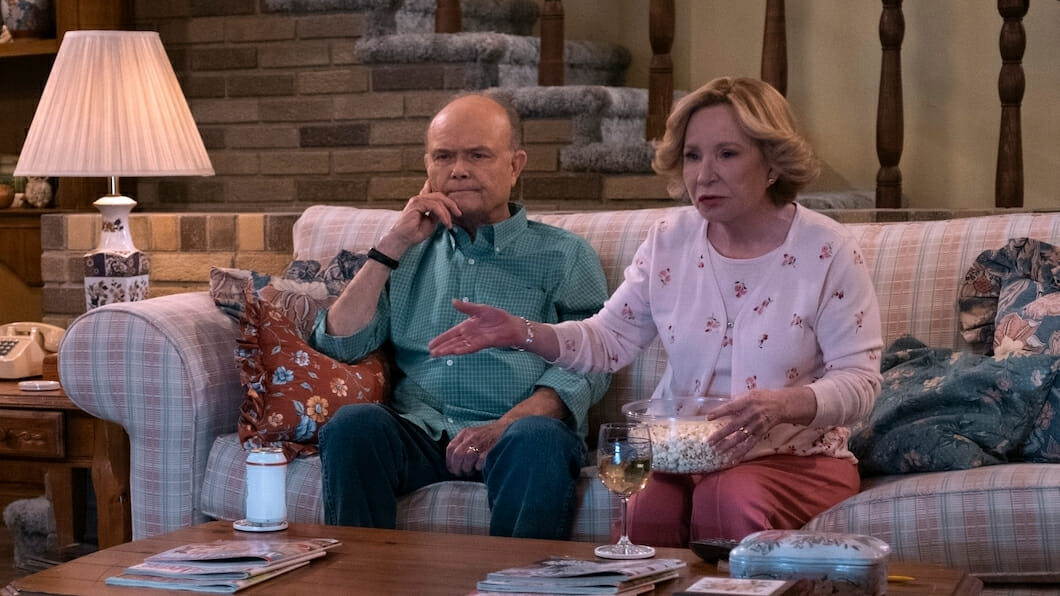 Netflix is kicking off 2023 with a packed lineup of new arrivals this January. Subscribers will be able to dig into fresh Netflix original series like the experimental heist drama Kaleidoscope led by Giancarlo Esposito, the Danish noir-thriller Copenhagen Cowboy created by Nicolas Winding Refn, and Lockwood & Co. which is based on the popular supernatural young adult novels of the same name by British author Jonathan Stroud. Of course, all eyes will also be on Netflix’s That ’90s Show in January 2023. The streaming revival of That ’70s Show has quite the legacy to live up to, seeing as that beloved series ran on network television for 8 years from 1998-2006. Luckily, most of the original cast is coming back for whatever new hijinks Netflix has in store.

Moving on to films, The Pale Blue Eye is the hottest Netflix drop of January 2023. Starring Christian Bale and the impeccable Harry Melling, the noir-thriller follows a veteran detective who must solve a case of grisly murders in 1803 New York with the help of a young Edgar Allen Poe. Netflix is gaining tons of must-see classics in its revolving film library as well. In honor of The Fabelmans, subscribers can have a Steven Spielberg double feature with The Aviator and Minority Report. Speaking of double features, Tony Scott’sTop Gun is back on the streaming service and there’s no better time to watch the 80s staple back-to-back with Top Gun: Maverick. In the mood for more 80s nostalgia? The first five Rocky films are now available to stream again too. Finally, Minions: The Rise of Gru is sure to be a major Netflix debut for families in January 2023.

Discover more on our monthly recs and check out the list of everything coming to and leaving Netflix in January 2023 below! You can also find what’s new and about to expire from HBO Max and Disney+ right here on DiscussingFilm.

Kaleidoscope brings in the new year on Netflix with this streaming platform’s latest gimmick-based original series. Created by author Eric Carcia (Matchstick Men), the premise of Kaleidoscope is easy enough to follow on the surface. A master thief assembles a crew to pull off a heist worth $7 billion and must ensure that past grievances and greed won’t get in the way of what is easily the job of a lifetime. Giancarlo Esposito stars as this master chief and is joined by Paz Vega, Rosaline Elbay, Jai Courtney, Tati Gabrielle, and Peter Mark Kendall.

The real appeal to Kaleidoscope comes with its non-linear episode order. All 8 episodes take place at different times leading up to the heist and some even take place after. These time settings range from 6 weeks before to 7 years before to 6 months after the heist, to give more precise examples. This non-linear order means that people can start the Kaleidoscope at any point they desire, however, the final episode is the heist itself and is intended to be viewed as the grand finale. Netflix has received praise for radically experimenting with the streaming format before (like the decision-based viewing experience of Black Mirror: Bandersnatch). Could this non-linear approach prove to be as popular? Tune in to find out.

Kaleidoscope is now streaming only on Netflix!

Copenhagen Cowboy marks the first Danish-language work from Nicolas Winding Refn since Pusher 3 in 2005, the end to his Pusher Trilogy which first established his name as a modern force in Danish cinema. Since then, Refn’s name has become much more popularized in Hollywood with cult hits like Drive and The Neon Demon. Some people might even recognize him through his friendship with the prolific Japanese video game Hideo Kojima, as he had a supporting role in his last best-selling title Death Stranding. After creating and directing the neo-noir miniseries Too Old to Die Young for Amazon in 2019, Refn is now placing his bets with Netflix on his next long-form project, Copenhagen Cowboy.

Just like Too Old to Die Young, the main playground of Copenhagen Cowboy is a vast, mysterious, and colorful criminal underworld. Nicolas Winding Refn’s new series follows a renegade named Miu (Angela Bundalovic) out for revenge in Copenhagen’s dirty underbelly. Peculiar crime syndicates and themes of existentialism are Refn’s well-known trademarks by now, but Copenhagen Cowboy promises to deliver a story in 6 episodes that will even keep this filmmaker’s most dedicated fans on their toes. This show’s success could very well determine what path Refn takes soon after, whether that be in Hollywood or back in his home country of Denmark.

In this story, Landor enlists Poe as a young military cadet to solve this case. Harry Melling, who first rose to fame in the Harry Potter franchise and has since left a strong impression in films like The Devil All the Time and The Tragedy of Macbeth, continues his impressive career streak in this unique portrayal of Poe. In piecing each ghastly murder together, the duo soon finds themselves down a rabbit hole that leads to practices of black magic. Gillian Anderson, Lucy Boynton, Toby Jones, Charlotte Gainsbourg, Timothy Spall, and Robert Duvall round up the supporting cast.

Netflix’s continuation of That ’70s Show takes place two decades later in 1995 and will focus on Leia Foreman, the teenage daughter of original series leads Eric Foreman (Topher Grace) and Donna Pinciotti (Laura Prepon), as she comes to say with her grandparents Red (Kurtwood Smith) and Kitty (Debra Jo Rupp) for the summer. Through the eyes of Leia, played by newcomer Callie Haverda, fans will be introduced to the latest generation of young delinquents of Point Place, Wisconsin, including her love interest in Jay Kelso (Mace Coronel), the son of Michael Kelso (Ashton Kutcher) and Jackie Burkhart (Mila Kunis) from the returning cast.

Aside from all the recognizable names already mentioned, Wilmer Valderrama, Tommy Chong, and Don Stark will also be receiving special guest star appearances. That ’70s Show fans should know right off the bat that, just like any legacy sequel project, the next generation of youth will take the lead here with old faces popping in and out as supporting roles. Discovering the adult fates of favored characters like Fez and Michael Kelso should be hilarious to watch, but that’s not what That ’90s Show will mainly be about. It is unknown if this revival will acknowledge the absence of Danny Masterson’s original character Steven Hyde at all, as the actor was not asked to return on the account of his ongoing sexual assault trial.

The Devil to Pay

Netflix has a few expiring titles to be mindful of in January 2023. Firstly, those who’ve recently become Addams Family fans because of Wednesday or who want to dive into more stories with the famed group should watch Addams Family Values before it leaves Netflix on January 31. Barry Sonnenfeld’s sequel to the 1991 film lives up to the Addams Family legacy and holds up on its own. The critically acclaimed biopic Steve Jobs starring Michael Fassbender, Kate Winslet, and Seth Rogen is a film not to be missed as well. Netflix subscribers should lastly be aware of departing shows like L.A.’s Finest, Z Nation, and The Borgias. Check out what’s leaving Netflix in January 2023 below.